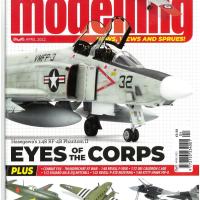 In between these sections are a history bit called Combat File and 9 build articles covering aircraft in 72nd, 48th and 32nd scales in this issue. These are 3-6 pages long and have good size pictures, most showing in progress shots. They also vary between out of the box builds and builds using aftermarket details. The write ups are easy to follow and the pictures are very helpful.

Overall this looks like a quality product and worth adding to your library.

The magazines are available at several Barnes & Noble bookstores across the US and subscriptions are also available from the publisher. Phoenix Scale Publishers also offer the magazines in digital format which come with extra content and are 100 pages or longer.

Thanks to Phoenix Scale Publications and IPMS/USA for the review sample.