Aircraft of the Red Flag 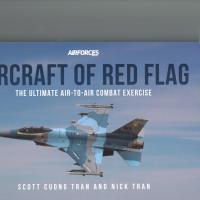 The book contains seven chapters with an introduction, epilogue and end notes. In the introduction you are exposed to the reasons of the Red Flag from its inception in 1975. The photos in the book are those taken between 2018 & 2020. The next section of the introduction provides the reader with the best location for the pictures. All the pictures provided in the book are in color and are of excellent quality. Red Flag operations are located at Nellis Air Force Base. Chapter One deals with the support aircrafts used by The Red Flag organization. The support aircraft includes the EC-130H; Boeing E-3B Sentry; the KC-135 Stratotanker and the HH-60G Pave Hawk. Some of these aircraft are not stationed at Nellis Air Force and they come from all over the states. The second chapter takes you into "strategic Interdiction." This chapter deals mostly with the use of US bombers such as the B-52 and B-1 and gives us a sample of their use in interdiction operations. Bases from across the nation are represented in this program. Blue Force Fighters is the theme of chapter three. These are the visiting units and the ones that will face the enemy, which in this case will be the Red fighters. The planes shown in this chapter include the F-15C Eagle; Fairchild-Republic A-10C Thunderbolt II; F-16C Boeing EA18G; Boeing AH-64E Apache; F-22 Raptor and F-35. These planes represent many units across the USA.

We are finally introduced to the Red Flag unit which is the 64th Aggressor Squadron which is part of the 57th. Wing. They own and operate 20 F-16C Fighting Falcons, and they provide a realistic threat to the "Aggressors" and can trace their heritage to the Vietnam War. The idea was to force pilots to practice against aircraft and pilots that they were unfamiliar with. Thus the Red Flag forces, also known as Red Eagles was created. Nellis Air Force Base is the home for the Aggressors, as well as for the weapons school. The planes used by the "Aggressors" are camouflaged like the real aggressors that the pilots may encounter in combat.

The next chapter is about the contract support that the combat training needs. In this area we are introduced to several foreign airplanes which have completely different characteristics than the F-16's. We see planes from the Czech Republic and France. The next chapter is dedicated to the international participants of which Red Flag has hosted in 29 countries. Aircraft that appear are Super Hercules; 2000 Typhoon; Lockheed C-130J to mention a few. Other participants include the Luftwaffe and Italian Air Force.

The last chapter is dedicated to the "Thunderbirds." Although the Thunderbirds were created in 1953 their history can be traced to 1917. We are given a short story of the Thunderbirds. We are introduced to the planes that the teaam has flown throughout their life and they end with the F-16 which is the plane currently used by the team.

The Epilogue presents the importance of the Red Flag program and how it has changed and provides the participants with insight and complexity of aerial combat. If you are interested about The Red Flag operations and the aircraft they use this book is a good introduction to the subject. I enjoyed each and every picture as they were clear and in color. I would recommend this book to all those interested in Red Flag.

I would like to thank Casemate Publishers, as well as Key Books for the opportunity to review this offering.