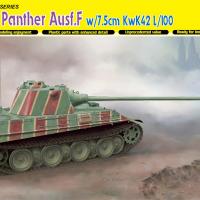 Anyone who knows me well knows that I’m a bit of a fan for speculative or hypothetical armor. In this field, Dragon Models has done me well over the decades, and I’ve had the pleasure of assembling everything from their E-100 and Kugelblitz AA tank to a couple of variants on the Panther F. This latest incarnation sits well with my other renditions and then some.

As is typical of Dragon, the box comes packed with parts; 17 sprues in all plus clear parts for the periscopes, three separate sheets of photoetch, two types of metal cable for the tow ropes, a metal shroud for the mantlet and rubberized tracks. There’s also a tiny decal sheet that seems to have been tossed in more as an afterthought. Predictably for Dragon, you’ll inevitably find yourself with a host of spare parts which should be useful for other projects.

Out of the box, there are essentially two types of Panther F you can build – the prototype and a production version. Not being an expert on the F, I’m not sure of the logic of offering both, as I’m rather skeptical as to whether there ever WAS a production version. However, that being neither here nor there, Dragon Models doesn’t stint on these variants, offering two complete upper hulls with miniscule differences as well as all the other required parts. In addition to offering the dramatically long L/100 version of the main gun, the original shorter version is supplied as well in case you prefer this, although it’s not mentioned in the instructions.

On this model, Dragon has taken slide mold technology to its apex, as virtually anything and everything that might require additional detailing is done in this manner, including track link rails with separate cotter pins fitting into a host of tiny mounting holes. In all honesty, I don’t think I’ve ever seen a kit where this process is used to such good effect. The end result is truly stunning.

There are still a few things worth mentioning about the assembly, though. In Step 2 where you install the arms for the bogeys, Dragon offers the complete torsion bar assemblies for these, which makes this an unnecessarily complicated assembly, especially as most of this detail is lost during assembly. On the other hand, if you intend to purchase any aftermarket interior kits for this model, Dragon has already provided a very detailed subfloor for the hull. Be cautious during this assembly step as there are numerous torsion bars, all of which look virtually identical and can be easily mixed up. In addition, Dragon offers a choice of rear torsion bars and idler wheel assemblies without bothering to explain the differences between them. I would have preferred a bit more information concerning these options.

Step 3 is where you add the wheels. Dragon includes a single set of steel wheels, although once again these are not mentioned in the directions. I chose to use them, however, as I figure the weight of that awesomely long gun would put a lot of stress on the front bogeys. Besides, it adds a certain charm to the finished product. Dragon also includes no less than five different exhaust variants in Step 4 you can select from.

Step 6 and beyond is where Dragon goes to town on the differences between the prototype and production versions, so read the instructions carefully here. The differences are, once again, pretty subtle but you should at least attempt to be consistent in your choices. All engine grills come with beautifully rendered brass screens as well as choices between open and shut engine vents.

The turret moldings display the results of years of research since I built my first Dragon Panther F models long ago, as it is both longer and more gently curved than the earlier renditions I possess. The detail, of course, is also far more extensive and it really looks the part. Not being a bean counter, I can’t say if it’s completely accurate according to whatever drawings or prototypes were left at the end of the war, but it certainly looks correct to me. I’ve included side by side pictures of an earlier Dragon Panther F rendition for comparison purposes.

Step 18 is the final assembly, and here is where I must make a couple of comments. To begin with, I have really mixed feelings about the new rubberized tracks. These utilize the new glue-able vinyl (or whatever the material is) which does simplify assembly. As well, this material beautifully renders detail with the track teeth displaying appropriate holes and other fine bits via slide mold technology again. However, they are also very, very soft – much softer than traditional vinyl -- which means that they don’t hold their shape particularly well around the idler wheel and drive sprocket. They also don’t hold onto paint very well – or at least enamels and lacquers -- and their garish color is a bit hard to cover up.

However, having built the spare track links for this model, each of which required two very tiny teeth to be glued on, I can certainly see why they chose this simpler path. Performing this assembly process for all the necessary links would have been an enormous task. That being said, I’ve had numerous other types of rubber band tracks give up the ghost over the years, which is why I’ve come to prefer styrene links or lengths. Only time will tell if this new type proves any more durable than the older style tracks, although I hope so as I really like this kit and would enjoy having it around for more than just a couple of years.

My other issue with the model is the surface of the hull and turret, which display no casting texture at all and only the shallowest of weld marks. In addition, in Step 1 Dragon would have you add a flat sheet of photoetch to the underside of the front hull for some reason. As this sheet is also totally smooth with only a suggestion of weld marks this only exacerbates what to me is an unrealistic appearance. I elected, therefore, to texture the surface of both the hull and turret and grind out the weld points to make them more dramatic, and that is the version you see in this review. This is purely a personal choice, however, and certainly not required in order to create a beautiful model from this kit.

The only other detail I added to the build was the addition of a commander’s MG mount which was taken from a Tamiya accessory kit coupled with a Dragon MG42. I passed on installing the spare track links in order to show off the beautiful racks for the equipment. I found the supplied wire for the tow cables pretty stiff and didn’t care to fight with it and besides, the box art doesn’t show these installed. I went ahead and painted the completed model pretty much as depicted, since it’s such a distinct scheme.

With the immensely long L100 gun and beautiful detailing overall, this kit makes for a very dramatic rendition of this hypothetical war machine. I truly do love these! I give my deepest thanks to Dragon Models and IPMS/USA for a chance to review and add this fascinating vehicle to my collection.