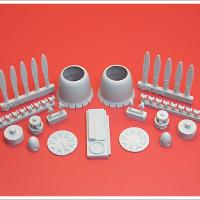 Mark Buchler has been around for several years, making small run resin detail sets for a few kits. His product line is not extensive, but what he does offer is high quality and usually fits the ticket for what is needed. Under the Modelshack label, Mark had a P-61 update set for the Monogram kit that included new cowls and engines. It was taken out of production while new, more accurate, tooling was made using Computer Aided Design (CAD). During the retool, Great Wall Hobby released their new P-61 kit, but it was quickly discovered to have several shortcomings in the cowl and prop area. Modelshack released the updated correction set, which fits both the GWH and Monogram kits, and gives marked improvement to both!

Modelshack keeps it simple with all 42 resin parts and a single-page instruction sheet being packed in a common zip baggie, which is shipped in a small cardboard box. One additional part, a prop tool in resin, is also included to help align the prop blades to the hub. The resin parts are nicely cast in a light grey resin that is not as dense as the darker grey resin that has become common, but holds the detail well and is easy to clean up. I found most of the parts cleanly cast, with a few of the parts needing a few swipes with a sanding stick to clean up some edges.

The cowls may need the remnants of some casting flash cleaned up around the opening, but this varies, depending on the casting batch. I also found myself using a micro saw and some sandpaper between the cowl flaps to make them a bit more uniform, as several still had some flash between them. Comparing to the kit parts, both the initial GWH P-61A and the recent “Glass Nose” parts, there is a marked improvement. The most obvious comparison is against the early release which had cowl openings that were far undersize. Compared to both releases, the Modelshack cowl has an overall better shape, being more cylindrical with a more pronounced taper in the front. The GWH cowls all have a more gradual taper which causes the cowl to lose some of the cylindrical shape.

Moving to the engine, the cylinders are beautiful with much better defined detail than what either Monogram or Great Wall provides. The cylinders provide one full row, while the rear cylinder bank is a nicely done relief casting where the cylinder detail is just as refined as what is on the full cylinder parts. At first, purist may be disappointed that a full engine is not provided, but once assembled and placed in the cowl you cannot tell that the rear row is only a fascia. The R-2800 engine core is provided as one part and has the correct cylindrical shape, which is actually due to a metal shroud over the crankcase on the real engine. The diameter of the crankcase matches the diameter of the props, unlike the kit where it is larger than the prop hub diameter on the GWH 48006 kit. Neither the Monogram nor earlier GWH kit correctly depicted the cylindrical shape at all, so the Modelshack parts are instant improvements. The prop hub themselves have a more accurate shape than the GWH kit, and are marked improvements over both the Monogram and GWH props, which are one-piece affairs with the blades molded solid with the hub. With the Modelshack separate props, we get properly separated prop blades with a mounting shaft that goes into the hub. The end result looks great. Two extra props are provided as well.

There are two adaptor parts to use with the GWH kit, which are merely resin spacers that insert into the ends of the kit boom assemblies and space the completed Model Shack cowl/engine assembly correctly on the front of the boom.

Instructions are provided as a full color letter size sheet, and are very adequate with both text and illustrations or photos. The instructions are also available on the website in a downloadable PDF if you would like to preview them.

One nice feature of the Modelshack parts is the minimal resin gates attached to the parts. Cutting them loose and subsequent cleanup was fast and painless. I started with the props, cutting them a little long and trimming as I test-fitted them into the hub. I did discover that the hub appears to fit a little too deep into the tool, thus making the blades point forward a bit. A sliver of sheet plastic inserted into the tool where the hub is placed raised the hub just enough to alleviate the issue. Otherwise, the tool worked perfectly, and you only need to be sure that each prop is square to the hub.

The engine was next, and it was a very quick process to cut off the cylinders and glue them into position onto the engine core. Push rod covers, which are not included as part of the resin parts, are cut and glued into pre-cast positioning holes in the engine core and cylinder head. This may seem daunting at first, but I found it went quite quickly. With the front row/core assembly complete, it was glued to the rear engine fascia. You could add ignition wires if you wanted, but after test fitting in the cowl, I realized they would barely be seen, so I opted not to bother. This brings me to my first point of improvement. If the crankcase cover was cast separately, one could use the GWH etched ignition harness, but since it’s all cast together there is no way to utilize the kit provided etched parts. Magnetos are beautifully cast and added as well.

As mentioned, the cowls may require a little cleanup between the flaps and around the opening. I also ran some sandpaper on the inside of the cowl to remove a few faint casting flaws that most likely wouldn’t have been seen, but I removed them anyway.

The engine unit slides perfectly inside the cowl, where there is an alignment tab and corresponding slot on the engine fascia plate. This sets it at the right distance from the front, and even squares it up within the cowl with little fuss.

At this point I would consider going back to the kit and mounting the exhaust stacks within the cowl. You will have to trim some of the front parts of the stacks, but they slide right into the cowl behind the engine and will nicely fill this space. For some extra detail, you may want to add cowl flap actuating rods between the flaps and boom. I test fitted the cowl to the boom (tacked in place with some BluTack), marking the center of each flap. Removing the cowl, I then drilled and inserted fine brass wire into the firewall on the boom. Mount the rods a little longer than needed, then re-fit the cowl, trimming the rods to size as needed until they perfectly fit inside the cowl flaps. Takes a little extra time, but is worth it as the flaps are fairly open on the Modelshack cowls.

To mount the prop, only a very short pin is included on the crankcase front. I suggest removing this, replacing with some plastic or brass rod, and drilling a deeper hole in the back of the prop. This would allow the props to be removed at will, and even spin if desired.

I am totally sold on Mark’s upgrade set. Not only did I find it easy to use, but it is also a complete solution no matter what P-61 kit you have. I would say it is absolutely necessary for those with the earlier GWH P-61A kit, and a serious consideration for those with the Glass Nose kit. At a reasonable $23.00 including shipping (which he will combine for multiple sets), it is a bargain for what it provides. The improvement just in the cowl shape, engine detail, and props is large enough to justify the cost. For those with the older Monogram/Revell kit, this set will really spice it up, as well as make both cowls consistent and better detailed. So either way, don’t hesitate to order from Mark. All of his Modelshack updates are available directly from his website, and from my personal experience shipping was very fast.

Many thanks to IPMS USA for the opportunity to review this, and to Mark Buchler’s Modelshack for the review sample!