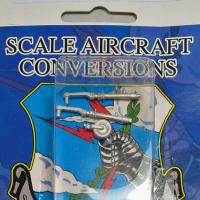 Scale Aircraft Conversions specializes in white metal replacement parts. Its line of replacement landing gear has been expanded to include a set for the Academy 1/48 P-47D, which has been boxed by Italeri and Eduard too.

The set includes 5 parts, two landing gear struts and scissors plus the tail wheel, finely molded in white metal. These parts are drop-in replacements for the plastic parts.

You can see from the pictures the parts are very cleanly molded and formed. Attaching the struts scissors is very easily accomplished with superglue as regular plastic glue will not work on white metal.

While dry fitting the parts, I’ve noticed that the white metal landing gear struts are molded a little bit shorter than the plastic ones. I was able to tell that when I presented the metal part to the landing gear cover and the alignment pins did not completely line up. Not a big issue and actually the shorter struts represent a combat loaded P-47 better in my opinion.

Once painted and weathered, the landing gears look very realistic and provide some extra strength to your finished model.