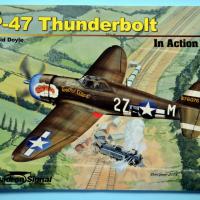 P-47 Thunderbolt in Action is the third ‘In Action’ book about the P-47 published by Squadron MMD. The first one (number 18) was printed in the early 1970s and the second one (#1208) was printed in 2007. The latest, authored by David Doyle, adds considerably to the material provided in the first two. It presents, in word and pictures, the full story of the legendary Thunderbolt from inception to production and wartime service. I happen to know David personally and have come to expect anything he authors to be thoroughly researched and well written…and the latest P-47 Thunderbolt in Action is no exception.

Simply stated, the P-47 was the largest single engine fighter of WWII. In contrast to more elegant looking fighters like the P-38, P-39 and P-40 that preceded it, the Thunderbolt’s massive proportions and huge radial engine quickly earned it the knick name ‘The Jug’. The massive P-47 was developed originally as an escort fighter for long-range bombers and the Jug performed splendidly in that role, with many Thunderbolt pilots achieved ace status against aircraft of the Luftwaffe and Japan. However, the Thunderbolt also accumulating an impressive record in a secondary fighter-bomber roll against ground targets, destroying myriad armored vehicles, ammunition dumps, enemy trains, trucks, artillery and aircraft on the ground. In fact, almost half of the 7,067 enemy aircraft destroyed by P-47s were destroyed on the ground.

P-47 Thunderbolt in Action chronicles the development and use of the famed 'Jug' from its genesis in the P-35 all the way to the long-legged P-47N. The book is 8-pages larger than most other ‘In Action’ books…something that seems appropriate for the large Thunderbolt. The narrative describes aircraft produced by Republic and Curtiss, along with the numerous experimental variations that did not see production. Sections cover the evolution from YP-47 and XP-47 through the P-47B, C, D, E, F, H J, K, M and finally the N. This story is told through detailed captions describing 62 color photographs and more than160 black-and-white photographs (many published here for the first time). In addition to the photos, which are almost worth the price of the book alone, the story is enhanced with multiple line drawings of details, 4-view general arrangement drawings of different versions and color profiles.

P-47 Thunderbolt in Action is available in either softcover or hardback. The sample reviewed here is the softcover version.

This book is highly recommended to model builders and aviation history buffs who would like know the full story of the P-47 Thunderbolt. My thanks to Squadron MMD for providing the review sample and IPMS/USA for the opportunity to review it.