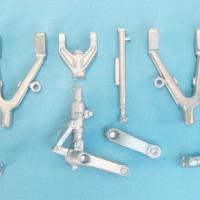 Four of the cast parts will replicate the front landing gear kit parts B4, B7, F10 and G1. These go together very easily with the use of medium gap filling super glue. The medium speed glue gives you time to align the cast parts. At assembly sequence #3, I used a spacer made out of plastic sprue to replicate the tire and keep the forks B4 and B7 aligned as the glue dried. Be extra careful with the part (F10) used to replicate the actuating arm as this is easily bent and will eventually break off.

Another item of note upon inspection is the SAC front gear appears to be slightly smaller than the Kitty Hawk gear in circumference. I pulled out the trusty caliper to confirm that the SAC land gear is actually only slightly (maybe a thickness of a hair/paper) smaller than the kit parts. Once painted and weathered this difference was negligible.

SAC landing gears are easily prepared using an X-acto knife #11 blade, a pin file and a flex file. As previously mentioned I assembled the front and main gear using Hobbytown medium superglue. On the front gear part G1 needs to be squared up on the attachment side and cleanly drilled out before assembly with part B4. Again main landing gear port parts F3/27 and starboard parts G30/31 will need to have their attachment ends filed square and drilled to accept the male parts F8 and G46.

After cleaning and sanding my replacement gear I mounted them to sprue using super glue. Then they were primed using Tamiya Fine Surface Primer for Plastic and Metal (white). Next they were sprayed Tamiya X-2 Gloss White and allowed to dry in the dehydrator for an hour. I then detail painted the oleo struts and all the bolt heads using Model Master Chrome Silver. Once fully dry (about 4 hours in the dehydrator) they were airbrushed with Pledge multi surface floor care (Future) to facilitate weathering. Relief details were then drawn out using AK enamel wash for interiors. At this point if the model wore ready the gear could be attached to the wheel wells again using superglue.

In comparison to photos found online neither the Kitty Hawk or SAC’s landing gear are 100% accurate to the actual aircraft. In particular the attachment location for the front actuator is undersized and misshaped. On the main gear the dog leg in the lowest strut member is not as pronounced as on the real aircraft. There are also no provisions for brakes on the gear which are quite prominent. Neither provides decals to represent the markings that exist on the aircraft gear as well.

I feel the SAC gear are good replacements, very easy to work with and will be substantially stronger than the Kitty Hawk OV-10D landing gear. Super detailers may want to correct the inaccuracies found and add further detail.

Thanks to Ross MacMillan and Scale Aircraft Conversions for the chance to review the OV-10D landing gear and to Dick Montgomery, Dave Morrisette and the support staff of the IPMS/USA reviewers corps.