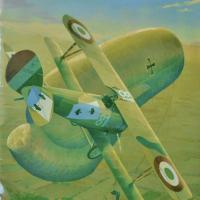 By 1916, the little Nieuport 11, also known to the French Militaire by its initials BB (which the French pronounced bébé), had succeeded in putting an end to the Fokker Scourge and therefore gaining the respect of ally and foe alike. A higher horsepower version, known as the Nieuport 17 followed and built on that legacy, becoming the preferred mount for many of the Allies’ first generation Aces. But subsequent efforts to continually improve upon Nieuport’s basic Vee-strutter design fell short of expectations with the introduction of the 24, 24bis and later the 27. Failing to match the performance of a new generation of fighters, these Nieuport designs generated little enthusiasm among French pilots who instead looked forward to flying the much-desired new SPAD. Unfortunately, SPAD production could not match demand and there was a war to fight so the new Nieuport fighters began arriving at the front in early 1917. From this beginning, the last of the Nieuport front-line fighters continued to serve throughout the war and after the armistice in the markings of several nations.

In this new Datafile from Albatros Productions, Aero-historian Paolo Varriale candidly describes Nieuport’s efforts to extend the career of its sesquiplane fighter design in this series of final front-line fighters. His well-documented text presents the story in an easy-to-read style that confirms the author’s thorough knowledge of the subject and his unique revisionist take on how these less than stellar fighters ended up serving in the air forces of 15 countries. Paolo thoroughly traces the wartime career of these classic aircraft and their ongoing operational life following WWI in many countries such as Russia and Japan.

In addition to the page-turning text, Nieuport 24/27 At War includes new full-view technical drawings in 1:72 and 1:48 scale by Marty Digmayer, nine full-color profiles by Rony Bar and a dramatic cover painting by Roberto Zanella showing Sergente Carlo Corti’s Nieuport 27 attacking an Austro-Hungarian Drachen. Its 36 pages are filled with more than 80 period photos, many of which are previously unpublished. Modelers will find a wide variety of finishes and markings to inspire future projects among these photos. Also included are numerous Nieuport handbook sketches, a comprehensive bibliography of further readings and appendices listing (by production number) all Nieuport 24, 24bis and 27 aircraft used by all countries, the license-built versions and complete Nieuport 24 Specifications. Very little, if anything about the story of the Nieuport 24, 24bis or 27 has been left out.

This publication is highly recommended to WWI aircraft model builders and those interested in WWI aviation history. My thanks to Albatros Productions for providing the review copy of this excellent publication and IPMS/USA for the opportunity to review it.