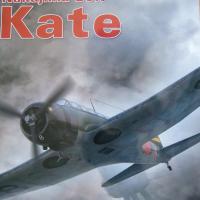 This book tells the story of the development and operational career of the Nakajima B5N Japanese Navy torpedo bomber, known as the Kate to the Americans, who developed a sophisticated identification system which avoided the linguistic problems associated with adapting the Japanese language to American use. In general, fighters had boys’ names, while bombers and other types used girls’ names. Therefore, Zeke, Nate, and Jack were fighters, while Nell, Betty, and Kate were bombers. The story of the development of that system is another story.

The book begins with the story of the development of earlier types of carrier based bombers, and how the B5N was the first Japanese Navy carrier based monoplane bomber, although its competitor, the Mitsubishi B5M, with its fixed landing gear, ran a close second. One factor not generally known is that the Japanese bought the first prototype of the American Northrop Gamma 5A in 1935 for evaluation, and used many of its construction features in the development of their aircraft. They weren’t actual copies, but they did copy the structural and production techniques.

Although the B5N was originally intended as a torpedo bomber, the first actual combat for the type was in the brutal Japanese invasion of China, where the plane was used as a light bomber in its original B5M1 form. The design’s weaknesses, mainly lack of suitable armament and armor and fuel tank protection, were not detected, and the B5N2, the later production model, still had those deficiencies. This resulted in a lot of losses in aircraft and aircrews which could have been avoided had improvements been made. The B5N-l’s did operate from some aircraft carriers in China, but it was the B5N-2 that became the mainstay of Japanese Navy carrier based attack torpedo bombers, only being replaced by the B6N2 Jill torpedo bomber in 1944. Towards the end of the war, surviving B5N’s were expended in kamikaze suicide attacks, often with little effect as they had little chance of surviving against Hellcats and Corsairs, especially with inexperienced crews.

The book goes into great detail in describing the development of the B5N series, explaining each feature and how problems were solved. Once the story of the technical development is complete, the author goes on to describe in detail the operational career of the plane, and how it was used in each battle it was involved in. Specific individuals are mentioned, very much like aces are described in books dealing with fighters and their pilots, although bomber pilots are not generally treated this way by most authors in this area. Photos show some of the people involved, and how they performed their duties.

Although the book provides a lot of very accurate historical information, there are a few glitches, including description of “Handerson Field” and “Asilto Field” when they should be spelled “Henderson Field” and “Aslito Field” but overall. The book is very well written, and is certainly worth reading if you want an overall coverage of this aspect of World War II.

Another good feature of the book is the extensive collection of photographs included. There were not many individuals doing personal photography during this period, especially among the Japanese, so most photos can best be described as “official photos”. After the war, many of these photos were gobbled up by collectors, many to never be seen again. The quality of many photos is not great, but most photos illustrate the markings carried, and the types of camouflage involved. There are even a few photos showing the pearl Harbor attack and shots of some the carriers involved. Overall, the subject is very well covered, and the color and black and white drawings are quite useful.

For modelers, there are a number of kits available of the B5N in 1/72 and 1/48, but not 1/32 scale. The best is probably the Hasegawa series, and this book will provide an adequate reference for anyone modeling these aircraft. Any good aeronautical library should probably include this book.