MiGs in the Middle East Volume 2: Soviet-Designed Combat Aircraft in Egypt and Syria 1963-1967 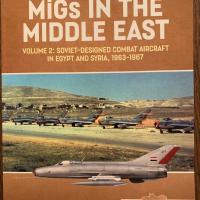 The book is volume 37 of Helion & Company’s Middle East@War series. While Volume 1 examined the delivery and use of Soviet designed combat aircraft in Egypt, Iraq and Syria, Volume 2 is limited to just Egypt and Syria and covers the time period from mid-1963 through mid-1967, ending right before the 1967 war. The book includes over one hundred black and white photographs, one page of color photographs and six pages of color profiles depicting the aircraft of the two air forces and the flight gear typically worn by flight crews during this period, along with maps and order of battle charts. Unfortunately, the quality of most of the photographs are very good, but as in Volume 1, some of them are blurry or fuzzy, which is not surprising given their age. I was pleased to see that only a couple of the photographs appear to be photographs taken of photographs published in another publication as there is a prominent line down the middle of the photograph. The color profiles are very well done, but as most of the aircraft operated by both air forces were unpainted, all of the aircraft depicted are in natural metal. The captions for the color profiles are highly informative and often the profiles include optional markings or variation seen on other aircraft as well as the different national insignias and identity bands used during this time period.

David Nicolle is a British historian, military researcher and author who has written several volumes for Helion & Company. His focus includes Middle East and Arab countries. Tom Cooper is an Austrian historian and prolific writer on aviation related subjects, especially in the Middle East. He has authored numerous books in Helion’s “At War” series.

The book is divided into six sections:

The first section discusses how the continued effect of the 1956 Suez Wart on the Egyptian military and its efforts to address some of the shortcomings it experienced during that conflict. Due the involvement of France and England on the side of Israel in the Suez War, Egypt distrusted western governments, so it again looked to the Soviet Union for assistance in addressing these shortcomings. To counter the growing capabilities of Israel’s aircraft, Egypt pressed the Soviet Union for more advanced aircraft and for help in developing a functional air defense system. The result was the sale of a substantial number of MiG-21’s (a true supersonic fighter), Tu -16 bombers, and An-12 transports to Egypt along with surface-to-air missile (SAM) systems and some older air defense radars. Unfortunately, the Egyptian Air Force was not ready for these new aircraft, especially the Tu-16 and the An-12 as it had very few trained multi-engine pilots, resulting in these aircraft often being flown by Soviet crews rather than Egyptian crews. In addition, while the Soviets agreed to sell Egypt the equipment necessary for it to develop an effective air defense system, the Soviets were not willing to provide the most recent versions of the equipment needed and Egypt was slow in acquiring what was offered,

The second section looks at the Yemen Civil War during the period 1962 to 1965 which saw Egypt supporting one side of the conflict with Saudi Arabia and England supporting the other. While Egypt’s participation was initially fairly limited, it quickly escalated and grew into a major commitment for the Air Force involving not only many of its transport aircraft but also its Il-28 medium bombers and Tu-16 heavy bombers. Again, due to the limited number of qualified Egyptian multi-engine pilots, many of the transport flights and the Tu-16 missions were actually flown by Soviet crews, including nocturnal bombing missions against western Saudi Arabia.

Section 3 discusses the growing harm that the Egyptian military’s rule by patronage rather than ability or competence had on the Egyptian Air Force. Advancement was tied to whom an officer supported, not how competent or incompetent they were, and senior officers grew hesitant to do anything without express permission of their patron or that could potentially go wrong. As a result, units received less and less realistic training and focused more on looking good on paper – circumstances that would come to haunt the Egyptian military in 1967 and beyond. There were a number of officers who tried to buck the system and raise awareness of the military’s shortcomings, but they were few in number and often demoted or re-assigned to suppress them.

Section 4 looks at rise of the Socialist Ba’ath Party in Syria and its overthrow of the Syrian government in 1963. While Hafez al-Assad had been expelled from the Syrian military due to his involvement in a previous coup attempt, he still had considerable influence in the Syrian Air Force and was able to convince a number of military units to not oppose the coup or support the existing government. However, the coup, a couple of countercoup attempts and several purges throughout 1963 cost the Syrian Air Force many of its experienced personnel and severely disrupted the service. Despite all of this upheaval, the Syrian Air Fore gradually expanded and acquired more modern aircraft such at the MiG-21. Tensions between Israel and Syria also grew during this period resulting in several air-to-air encounters between Israeli and Syrian Air Force aircraft including several in the “Water War” between Israel and Syria.

Section 5 looks at Egypt’s attempts to counter incursions by Israeli Vatours and Mirage III’s into Egyptian air space and its acquisition of more advance versions of the MiG-21, the Su-7 fighter-bomber, and the cruise missile armed Tu-16K Badger. It also includes a discussion of Egypt’s failure to develop an effective air defense system, despite its receipt of a large number of SA-2 SAM systems and its failure to take any steps to protect its aircraft while they were on the ground.

Section 6 re-visits Egyptian operations in Yemen and its growing frustration with the lack of any progress by the Yemeni government in defeating the rebels, as well as the costs of its intervention.

I enjoyed this look at the trials and tribulations experienced by both the Egyptian and Syrian Air Forces and the effects of political interference in both of them. Highly Recommended.

Maps of Israel and Syria