The Red Baron, A Photographic Album of The First World War's Greatest Ace 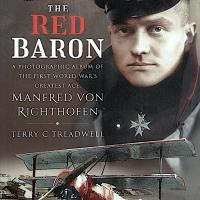 There is probably no more well-known figure from the Great War, or more written about or discussed, than the infamous Red Baron- Manfred von Richthofen. The original ringmaster of the Flying Circus, his record stands for itself and no plane from that war stands out more from historians down to watchers of Snoopy and his antics in his Sopwith doghouse. This thin book at 157 pages is filled with excellent clear photographs of von Richthofen from his childhood up through his career to his bitter end over enemy lines. More on that later.

Going from the table of contents, it doesn't seem like there is much inside with only two chapters and then some appendices, but these two chapters take up the first 127 pages of the book. After a brief introduction, the author details the events leading up to the start of the war and Manfred´s early life and time in military school, and then delves into his start in the cavalry and eventual transfer into the Air Service as an observer. After meeting the great Oswald Boelcke in October of 1915, his desire to become a pilot was spurred on, and despite some early mishaps and accidents, he successfully passed his final flying exam and became a pilot on Christmas Day of the same year.

Interspersed throughout the informative text are numerous photos taken of Manfred through the many stages of his military career as his fame rose. I never really realized how many photographs were actually taken of him, and nearly all are ones I have not seen before. Chapter two opens up with Manfred at about 40 victories and carries on up to the end at 80, as well as a major head injury in battle. The chapter concludes with a thorough overview of his being shot down and killed. There are many photos of the wreckage and those possibly involved. The chapter concludes with four possible scenarios for how he met his end: Captain Roy Brown, Australian gunner Robert Buie, Australian gunner Cedric Popkin, or an unknown rifleman. There is a following section detailing Richthofen´s post mortem that I found fascinating. Finally there are two appendices-- one listing his 80 victories and another listing all of his decorations and awards. A glossary and index completes the book.

I found this small book to be immensely interesting and informative. There is no end to the wealth of lore and accounts of the Red Baron out there, but this book makes it easy for someone just learning of his exploits to get a pretty good overview of the man and the pilot in one place. As someone who has been interested in WWI aviation for as long as I can remember, this book was great for me as well and almost has me cracking open that Wingnut Wings kit I have been treasuring in my stash.

My thanks to Casemate Publishing and IPMS-USA for the review sample.