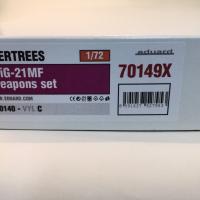 In conjunction with the release of its new 1/72 MiG-21 series, Eduard has released an Overtree set of the weapons sprue that is included with its new MiG-21MF kits. In looking at the weapons included on the sprue, I expect that this sprue has been designed to be a common sprue through-out all its planned MiG-21 kits.

The set includes two 490 liter tanks which are either mounted on the outer wing pylons or a single tank on the centerline and one 800 liter centerline tank. There are four types of air-to-air missiles – two RS-2US (AA-1 Alkali), two R-3S (AA-2 Atoll), two R-13 (AA-2 Improved Atoll) and two R-60 (AA-8 Aphid) air-to-air missiles. For ground attack load outs there two types of rocket pods (UB-16 and WB-32), two S24 unguided air-to-surface missiles, two FAB 250 kg and four FAB 100 kg dumb bombs. The set also includes the different pylons needed for mounting the different weapons on the four underwing and one centerline hardpoints. There is also a single MBD bomb rack on which the four FAB 100’s can be mounted.

The molding of all of the parts is outstanding with finely engraved panel lines and each pylon is different based on where it is mounted and what is mounted on it. The tanks are very nicely done and fit together very well with just a slight seam where the tank halves join. Most of the parts have slight molding seam, but this is easily cleaned up.

As this set is the same sprue as is included in the kits, releasing this as an Overtree is really a great idea because for many load outs, there are not enough of the weapons on the kit tree to complete the load out so you will either need to buy another Eduard MiG-21 kit or pick up this Overtree set in order to arm up your Fishbed. For example, one of the weapons load outs shown for the Interceptor kit is for a centerline tank (either 490 liter or 800 liter) and four air-to-air missiles (R-3Ss or R-13s). As the kit only includes two of each type of missile, you will need an additional weapons sprue in order to get four of the same missile. In many cases picking up one set of this overtree set will allow you to arm multiple aircraft with different load-outs. However, you will also need to pick up the MiG-21 stencils decal sheet Eduard has also released to get the markings for your weapons.

I am glad that Eduard decided to release this sprue as an overtree set and I think it makes a lot of sense, so I hope they keep it in their catalog as long as they are releasing 1/72 MiG’s or other Soviet/Russian aircraft as many of these weapons are carried on other platforms. It would have been nice for them to include a small decal sheet of the stencils for the weapons, but if you also pick up their MiG-21MF stencils decal sheet, you will be set for quite a while.

A nice addition by Eduard especially for those modelers who shy away from resin sets. Strongly recommended.

Thank you to Eduard for the review sample.