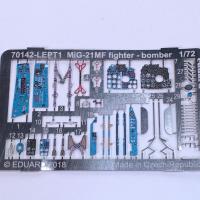 This set is designed to be used on Eduard’s MiG-21MF “Fighter-Bomber” kit that was released by Eduard last fall. The set provides full color replacements for the cockpit walls, consoles, canopy rails, canopy and the instrument panel. It also includes a several pieces for the ejection seat harness, the “Odd Rods” IFF antennas and static dischargers.

The first step is to paint the kit cockpit tub parts. The instructions advise you to paint the cockpit Mr. Color H-46 Emerald Green, however, this color looks much to green to me, so I experimented with a custom mix of 5 parts Tamiya X-14 Sky to 1 part Tamiya X-25 Clear Green which turned out to be pretty close to the color Eduard used for the sidewall and console parts. The sidewall parts need to be bent slightly to match the kit parts, I elected to glue the sidewall in the respective fuselage halves and then attaching the etched sidewalls as this allowed me to clamp the etch pieces in place while the superglue dried. The instrument console pieces fit very easily as long as you use the blank side console pieces provided in the kit. For the instrument panel, the base color is again the blue-green color. I recommend painting the radar scope flat black before attaching the instrument panel etch, to avoid getting any paint on the etched panel parts.

Next was attaching the two black backer parts for the upper and lower instrument panels which have the instrument faces painted on. Then the front portion of the upper and lower panels are attached, taking care to ensure that the instrument faces line up with the hole in the front panel pieces. I added a drop of future to each instrument dial for the glass. I also installed the small red handle that goes on the right side of the lower instrument panel at this time, all though it is very hard to see this detail once the cockpit is closed up inside the fuselage.

The set includes two parts for the upper seat harness, two lap-belts and the ejection handle. The handle must be bent over itself first to provide color on both sides and then it needs to be bent into a slight “V” shape before it is attached to the front of the lower seat pan. When I compared the harness provided in this set to the one provided in the Brassin cockpit set for the Fighter-Bomber, I was surprised to discover that the upper harnesses as provided in the two sets are very different, but I don’t know why.

Externally the set includes three of the “Odd Rods” IFF antennas as presumably you are to cut off the set molded on the top of the vertical tail, replacing it with one of the ones in the etch set and using a second one for the lower set of antennas as they are not included in the kit at all. It also provides the strakes for the lower front fuselage, brake lines for the main gear and static dischargers for the trailing edges of the wings and tail, I used the strake as they are much thinner than the kit parts and look really good. I did not use the brake lines as they look two dimensional, even in 1/72 scale. I have not yet made up my mind about the static dischargers, as they do add a nice touch a model, however, I do not have very good luck in keeping them attached as they are easily broken off when handling a completed model.

As to be expected with Eduard, the cockpit pre-painted instrument panels, consoles, sidewall and ejection seat harness really elevate the appearance of the cockpit, but I would not use them if you plan on closing the canopy as they will then be all but invisible. I also think the etch strakes and Odd Rods antennas add a nice touch to the exterior of the jet.

I really enjoyed this set and it makes the airplane come alive. I highly recommend this set. It is currently listed as being discontinued, but I trust it will be back as Eduard releases more boxings of the MiG-21MF kits.

Thank you to Eduard for the review sample and to IMPS-USA for letting me review it.