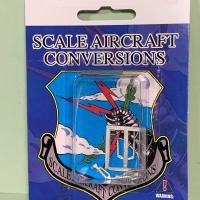 This set provides replacement gun fairings and barrels for the new Airfix MiG-17F kit. The set consists of three gun fairings and three barrels to replace the kit guns. The fairings are on-for-one replacements for the kit fairings, but the barrels are a huge improvement over the kit barrels as the business end of each barrel is hollowed out rather than solid, so they really look like gun barrels.

Installation of the fairings is exactly the same as for the kit parts, other than having to be attached with superglue. As MiG-17 kits are notorious tail sitters, I had packed as much weight as I could in the cavity between the intake walls and in front of the cockpit tub, but I had also ended up putting some under the cockpit. Unfortunately, some of this weight partially blocked the hole where the larger fairing was to be installed, so I have to carve off some of the attachment plug in order to get it to fit.

I also sanded down the mating edges of the other two fairings as when I test fitted them, they stood a little proud of the fuselage. The only filler I used was as the back of the largest fairing to get it to blend into the kit, however, I had noticed the same issue with the kit part, so I had expected this to be required.

As the barrels themselves are very fine, I left them off until I had finished sanding and painting the model. They were painted Testors gunmetal and glued into the holes at the end of the respective fairings after the landing had been installed. The barrels look very convincing when view close-up, but unfortunately, the hollow ends do not show up well in photographs.

This is a nice set from Quickboost and provides a nice upgrade to the Airfix MiG-17 kit.

Thank you to Aires/Quickboost for the review sample and to IPMS-USA for letting me review it.