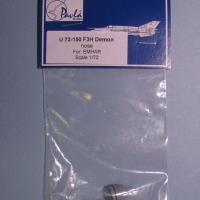 If you are looking to improve the appearance of the nose on your 1/72 scale EMHAR F-3H Demon, I would direct your attention to this new release from Pavla Models. Recommended for the EMHAR kit released in 1991, this replacement nose is a clear advancement over the old plastic nose provided in the kit. Modelers with some experience in using resin parts should have no issues with utilizing this part.

As I stated in another recent review, from my perspective, Pavla Models continues to quietly add new items to their product lines in order to add detail to existing kits; many of these lines are intended for aircraft modelers, but there are some AFV items as well. Pavla Models provides replacement canopies that are vacuum-formed as well as cockpit sets, ejection seats, and general detail sets for aircraft.

EMHAR issued their 1/72 scale F-3H Demon clear back in 1991, but let us not do the math on that here, as it may cause some of us to feel dated who can still remember the release. This replacement nose from Pavla Models provides a single resin part that is cast in medium gray resin. The main advantage to this replacement nose is that it comes to more of a point, as it should, where the kit nose is more rounded.

As I obtained my nose in conjunction with the Pavla Models cockpit set (C 72121), I opted not to cut off and sand the back of the nose flush, but left a small amount of the pout stub in place to fit inside the replacement cockpit/fuselage. This only required a little extra filing along the sides of the pour stub, but provided me a good top and bottom reference for installing the nose. I have found a gap when mating the nose to the forward fuselage, which I will need to address when I am ready to complete the installation, and this may lead me to completely removing the pour stub.

As far as my hits are concerned, the resin nose is molded very well, and the pointed end is more accurate in appearance than the rounded plastic nose provided by EMHAR. The nose is also molded clean with no excess resin aside from the pour stub, which is typical for most resin items.

My only miss with this item is that the fit between the nose and forward fuselage was not as clean as I would have expected, but resin parts often require some fine-tuning to adjust the fit, so it is not completely unexpected.

In conclusion, I would highly recommend this replacement nose to anyone looking to improve the overall appearance of his or her 1/72 scale F-3H Demon, as it is a great improvement over the original kit part. The nose is reasonably easy to use, especially if you have worked with resin parts previously, and should not present too much of a challenge to those with limited experience with resin replacement parts.

I would like to thank the folks at Pavla Models for providing this cockpit set to the IPMS-USA for review, as well as to Dave Morrissette who runs the Review Corps for allowing me the opportunity to put the set to use. I always like to recognize the folks who help behind the scenes with the Review Corps for their efforts, and finally, my most sincere appreciation to all who take the time to read my comments.

Close Up of Nose Cone

Nose Cone in Place
Previous Next