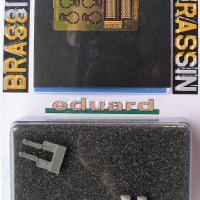 Developed as a replacement for the Maschinengewehr 08, the MG-14 Parabellum was a machine gun used on WWI German aircraft that was capable of firing 700 rounds per minute of its deadly 7.92 mm ammunition. Although Anthony Fokker used this model gun in the development of the synchronizing gear for his aircraft, the gun was typically used in the flexible mounts of reconnaissance aircraft, bombers, and Zeppelins. The lighter weight of the gun (as compared to the MG-08), high rate of fire, and reduction in the size of the ammunition belt, set the MG-14 apart as a weapon of choice.

Eduard did a great job capturing the detail of the MG-14 with the stock/receiver and ammunition drum being cast in resin, while the ammunition drum faces and their details, barrel jacket, front sight, and trigger/guard are photo-etched parts. The set includes eight parts for each gun, with two guns contained in the kit, and a single sheet of paper with directions and recommended colors (Gunze color numbers are provided along with the noun names). Also mentioned in the instructions are a 12 mm piece of 0.25 mm wire and a 13 mm piece of 0.6 mm plastic rod, which are not included in this release.

Aside from mentioning that you should have experience in handling small photo etched parts to avoid frustration with this kit, I also recommend caution when removing excess resin between the stock and grip, as it would be easy to break off the grip while cleaning. The brass jacket rolled easily, and was far better than some of the photo-etched jackets I have had to form in the past.

For construction, I used a mix of a medium viscosity CA and thin viscosity CA to attach the PE parts to my guns. I also tried out one of the new UV light activated glues to attach the ammunition drum to the gun itself as this instantly set the drum in place. I painted the guns with a coat of Vallejo Surface Primer Black followed by Vallejo Burnt Cadmium Red over coated with Floquil Cherry Flo-Stain on the stock and grip, and then I utilized a drafting pencil to add tone to the bullets in the ammunition drum, while Humbrol Brass provided the shell color.

My hits for this set would have to start with the fine level of detail cast into the resin parts as well as the photoetched parts for the trigger, barrel jacket, and ammunition drum. The guns build up quick and easy, with only minimal cleanup of the resin items. There is a nice recess molded into the receiver for a barrel, which makes alignment with the jacket front cover/sight a snap.

The only miss that I had, which may just be a personal item for me, were the lack of the wire for the brace between the ammunition drum and barrel, and the barrel itself. I purchased a tube of stainless steel suture wire at my first IPMS Nationals (Virginia Beach, 1996), and thought that it looked about right compared to photos of the real gun. At the Nationals last year I picked up some 0.5 mm (outside diameter) brass tubing from Albion Alloys Inc., which I think looks good for replicating the barrel in this scale.

In conclusion, I would highly recommend these Eduard MG-14/17 guns to modelers who are looking to add that extra level of detail to their 1/48 scale WWI German aircraft. The detail is great, and building the guns should not present a challenge to those experienced with resin and small photo etched parts.

I would like to thank the folks at Eduard for graciously providing this gun set to the IPMS-USA for review and to Dave Morrissette for allowing me to receive this set. I would also send kudos out to the assistants in the Review Corps for the great job they do in keeping the Corps running strong and as always, my appreciation to anyone who takes the time to read my comments.