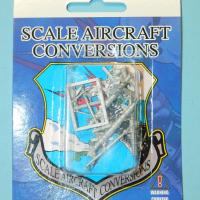 Consisting of 14 separate well-cast white metal parts, this gear is the usual replacement for the kit gear. It’s been my experience that GWH tends to use a more robust plastic than many other manufacturers, but SAC metal gear is still worthwhile to install.

This SAC set adds the usual structural strength to the weakest part of most models: The landing gear. Cast tough yet malleable white metal, it addresses any concern for splayed and failed landing gear for the new Grand Wall Hobby SU-35S. Consisting of fourteen perfectly-cast parts, SAC gear in this case also allowed my use of a new and improved resin nose radome from Quickboost to “accurize” this absolutely gorgeous kit, and provide a bit of nose weight without my being concerned of gear failure. The Sukhoi series of fighters have extremely long and spindly nose gear and metal is a worthwhile investment. For this build I also purchased and used the improved articulated engine augmentor exhaust nozzle from AMIGO models in Russia, which added a delicate yet important visual effect on the final kit of this “Super Crane”. Don’t get me wrong, every new release from GWH seems to be better engineered and detailed than the previous one, and this jet is their best yet.

SAC’s gear incorporates a revised mounting boss and trunnion assembly, providing a solid, sturdy mounting point for the main gear, which is in this case “raked back” instead of vertical. This doubles the utility of the SAC gear, as any angles incorporated in landing gear other than directly vertical will induce stress on mounting points.

I found it necessary to drill out the landing gear boss, as the holes were blocked by metal overflow. This is to be expected in short run projects, and I was able to drill while the parts were installed on the kit. The effort was worth it, just use a sharp bit and try not to front-load or press on the drill too hard. You may have heard the expression “let the tool do its job”… and in this case, that was appropriate. Drill carefully and you will be rewarded.

There are occasions where White metal is not as good a material as plastic or wire, such as long tubes, control runs, etc… but I did not need to use any plastic kit details on the gear except the shimmy damper/steering cylinder assembly and lights, which are not part of the metal additions.

Installed on the model, the SAC gear shines (literally) due to its strength. Buy and use this gear without concern, as it does work. How do I know? I dropped the model with the gear installed. I had to re-bend everything back into place, but this was not a problem and will actually make the gear stronger. (work hardened metal) It won’t take several hits like this, but it sure saved my bacon, because when I’ve dropped a kit with plastic gear it’s always a traumatic rebuild of the gear.