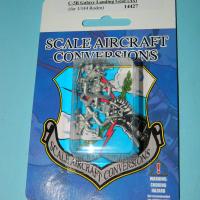 IPMS/USA thanks Ross and his Team at SAC for supporting the IPMS USA reviewer corps with one more of many monthly releases, with extremely useful and well-thought out landing gear additions for the modeling crowd out here in the modeling world. And thanks to IPMS leadership for sending it to me to be reviewed. New crew is on point and clearing well…

This review is for the SAC landing gear released for the new release 1/144 C-5. I shall refrain from calling the C-5 “Fred” in public because my old boss might find out. Old Generals show up at the most inopportune moments… and we were told not to call it that. BUFF is for the B-52. We’ll just call it “the Screamer” and leave it there.

This C-5 kit has been anxiously and impatiently desired by the community for decades, due to the dearth of C-5 kits on the market. The Otaki/Revell C-5A dates back to the 1960’s, and has been a collector’s item for quite a while. IIRC I first saw it in the local shops about 1970 or so, hence the almost 50 year thought. I wanted to build a C-5 badly, and I had ordered a 1/72 kit from a “to be unnamed” dealer about 15 years or so ago, as the kit was built and reviewed by Paul Boyer on Finescale modeler around that time… and my attempts to get the kit were unfruitful. That’s another story. I’ve seen (and had) the huge and princely-summed C-5 kit from Anigrand, and sold it when I decided not to have another “weightlifting while building” opportunity like the 1/72 C-17 was.

The C-5, however, is still a “must have model” for those of us from the Mobility community. While waiting for one in 1/72 scale, 1/144 seemed a coherent short stop, and so far I’m glad I have.

Roden’s kit is full of accuracy and a few questions, but that’s for another time. So far I have discovered the TF-39 engines are very well done for the A and B, and the overall aircraft shape, etc. look spot on. As the requirement to demonstrate the aftermarket bits involves a build up to the point you use the aftermarket, and, I have done so… and so far the kit hasn’t been a toss-at-the-wall item. It is a bit pricy, (OK, it’s expensive for what you get for whatever reason, when compared to Revell DE)… Why I don’t know, so I doubt it many will buy more than one. Carcal have just released two separate decal sets covering myriad A, B, and R versions (R for re-engined) and we therefore are spoiled for choice of markings.

Roden have provided an excellent representative of the basic wheel well for the aircraft, so the SAC gear just replaces the kit versions, which are a bit soft and had some flashing.

For the usual reasons, the SAC landing gear is a welcome addition to the Roden Kit, as the plastic is still a bit soft for my taste. Their plastic works well for the basic model, but I will state up front my Roden 1/32 O-1 Bird Dog already has saggy wings and wing struts because of the type of plastic they use, and it’s been less than a year since I built it. The SAC gear is still holding up… SO….

As is the norm, with this SAC set you can actually install the gear after the model is assembled. Comprised of 15 parts, (3 for nose gear, and four main gear sets…), and you get single-item main gear struts, and gear and truck assemblies provided as direct kit replacement items. They are just as detailed as the plastic parts, with no flash or seam work required, Just primer and install. The metal gear is delicate but strong, projecting a scale appearance. The metal parts just superglue into place, and when you install the wheels after painting, etc. you can adjust the trucks to sit flat and level with each other with judicious, careful bending.

The 3-part nose gear lateral gear mount, steering and shimmy dampers, fit into the existing mounting holes, which makes for a strong and durable assembly that is very easy to assemble and install.

One more thing: this kit can easily be displayed with the C-5A crosswind crab gear function, whereby the four mains and nose gear can be installed in a sideslip condition, duplicating the actual aircraft’s ability to land sideways while the aircraft flightpath tracks down the runway centerline. This is a cool thing to watch in high winds on both C-5 and B-52, which also has crosswind gear capability. Note: The C-5B did away with this feature. It can crab but is not mechanically designed to crab on intent.

As usual the strength of the gear makes their acquisition worth the extra cost for kit longevity; the metal takes the place of the kit plastic gear with ease, and it holds up the model without complaint. Another “10” Score set… thanks again to Ross and his crew for working with us at IPMS USA!