The Men Inside The Metal: The British AFV Crewman in WW2, Vol. 1 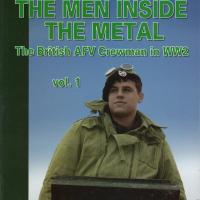 Thousands of books have been published over the years covering the various armored fighting vehicles utilized by British and Commonwealth forces in the Second World War, and many of them are sitting on my bookshelves, and I am sure yours. There are also numerous books on the various battles that took place involving these vehicles and the generals, officers, and enlisted men who took part. But it is rare that you get a book as detailed as this one on the individual crewmen who accompanied these machines into battle.

This book does not cover the training these men received prior to going into battle, nor does it cover their backgrounds prior to joining the armed forces. Nor does it cover the makeup of the units involved in the fighting. What it does cover, and covers it very well indeed, are the uniforms and other personal gear the AFV crews wore into battle, the badges and insignia adorning their uniforms, and their crew equipment and personal weapons.

The book is divided thus:

Together with excellent written descriptions of the items under discussion, each chapter is lavishly illustrated with both color and black and white period photographs. Additionally, there are numerous well chosen color photographs of uniforms and equipment from private militaria collections, and historical items utilized by modern day historical re-enactors. Finally the author utilizes, where appropriate, well drawn sketches, both color and black and white.

The written sections are very well put together, and easy to comprehend, and are blended very well with the photographs and sketches. All the photographs are very clear, and both these and the sketches will be of great help to those who include figures with their various military model vehicles.

The author Dick Smith is well known among those who study British military vehicles for his three part book series on the colors and markings of British Army Vehicles (1903-2003). I have this series, and it is excellent. Anyone reading this review today and who is familiar with Mr. Smith’s previous works can rest assured that his latest effort covering British crewmen in WW2 is just as well written, just as lavishly illustrated, and represents excellent value for money. I can’t recommend this book highly enough.

I would like to thank Mushroom Model Publications for providing this review sample to IPMS USA, and to Mr. Smith for providing the military historian and armor and figure modeler with such a well researched and written book.