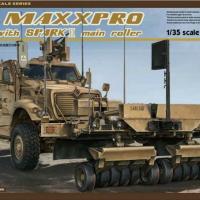 This is a reissue of the earlier MaxxPro kit issued two years ago, with the addition of Spark II mine roller parts. The ‘User Manual’ is twenty pages containing a map of the kit’s parts outlining 22 steps, a color four-view for one vehicle and no color suggestions or paint chart, though the four-view indicates that Gunze Sanyo Mr. Color were used in constructing the model.

This kit contains approximately 522 molded parts on 12 sprue trees, a sheet of 41 photo etched parts, four tires and a decal sheet. An example is that there are 3 sprue trees each marked a “B” indicator and each is a separate group of individual items—confusing to say the least.

From the earliest ‘details’ I found the various drawings to be lacking several key ingredients. When illustrating the assembly of the roller wheels, I was left guessing at almost every turn- and wound-up gluing most of the assembled parts and could not get the last two of the small wheels into the suggested place, simply leaving off the kit (when comparing the photos of the actual Spark roller plow assembly there appears to be several alternate wheel assemblies used). I also noticed several errors in the instructions where I was able to find the shown part by matching the drawing to the instructions, rather than using the part number when that number was incorrect. Remember as modelers we are assumed to be careful, meticulous and painstaking in our building efforts….at least that’s what I think.

I have been reasonably impressed with most of the surface detail, including most of the raised details, rivets, etc. I was far less impressed with lack of clear instructions. Clearly some of detailed notes were written by a non-English speaking person (e.g., page 3 which calls for ‘making fruo’ seats). The engine cover has an ever so small indentation which is very visible and requires careful sanding and priming. Another example is on page 4, when assembling the dashboard for the vehicle as you’ll see the very small locating stubs only match up for two of the holes while there are three stubs. Speaking of ‘stubs’, there are a lot of these little critters—everywhere! (see attached photo)

When it comes to the fit in general, this particular kit leaves a great deal to be desired and you need to understand that you’ll have your work cut out for you from the initial assemblies.

In essence this kit is ‘a kit within a kit’ which requires a great deal of ‘finishing’—sanding, trimming, fitting and cutting off the extraneous or unwanted. While mentioning the numerous fit issues, as an example the steering wheel shaft (ref: page 6, lower detail drawing) does not fit in or through holes provided, it’s too large. Then there’s the drive shaft and frame mounting points: while the specific locations are ‘locked in’ specified in earlier located places, they require dry-fitting and plastic surgery to adjust their placement. For some unknow reason, there are several additional drive shaft sections and wheels included on the sprue trees—without any known or intended locations?

A couple of examples may help me to explain. I spent a considerable amount of time painting the interior details only to find as I was completing this task that these details were lost to the world due to the slatted windows. The lowered stair assembly could not be assembled except in the lowered position. The same situation was evident as it applied to the side doors. As I did not intend to open these aspects, this detail was totally lost. This same issue was evident as it applies to the under-hull area: As previously noted, detailed painting throughout the suspension and undercarriage is lost as the v-hulled protection plate is installed. All of the details and painting are lost.

The kit tires are yet another serious disappointment: the holes where wheels mount is out of round and poorly formed with serious clean-up required again. How to correct the resulted fitting issues is still a puzzle in my mind. When I attempted to dry fitting the wheels and tires, I ran into serious issues as well. The wheel parts should not be put together before the tires are assembled as I learned the hard way--try as I might the tires can not be just pushed over the wheels.

The Spark II Mine Roller is yet another serious challenge, or at least it has been for me. Note that this entire assembly is a very delicate assembly and requires some finesse in just handling and painting it (no small task for a ham-fisted like myself). Researching the internet for photos of this critter quickly reveals there are numerous configurations for this ‘mine plow’ attachment. However, it boils down to a serious ‘Rube Goldberg’ project and a kit all by itself. Try as I might, I was never able to translate the often-incomplete instruction drawings into what saw in the box art depiction on pages 18-21. In the final analysis, I did not attempt to attach the mine roller to the MaxxPro vehicle and just pushed both parts together for my photos. The supposed locations do not match up with I believe to be the intended attachment points.

As a prelude, I used Vallejo Desert Sand Surface Primer #70.613 for most of the surface areas where I would be handling the model. I used a sole color of Mission Models paint: US Army Sand FS 30277 #MMP-086 for this entire project, which all of my reference photos appeared to be painted for the entire vehicle. A few small details were painted using Black #MMP-047 and Dunkelgelb #MMP-019 for the various details. I used the Crystal Smoke #A.Mig-095 to tint the windows.

A small exception is that I chose to paint the MaxxPro wheels in the basic sand color rather than the black color shown in four view drawings. This is the same color shown box top drawing and in numerous photos of these vehicles.

There is a small sheet of decals of which I only used one decal for the vehicle dash. For the most part these decals are so uniformly small as the be barely visible even using my Optivisor.

This kit was one of the more challenging in my modeling experience and while I would not recommend it as a ‘beginning kit’ as it was finished and joins in with the numerous military vehicles from the middle east combat. This is another example of the ubiquitous heavily armored vehicle in common use throughout our Afghanistan and Iraqi campaigns. It builds up as a very interesting and unique vehicle.

I really appreciate the opportunity to build this Panda kit and want to thank Panda Model company.

Interior Detail is Great but not visible on Finished Kit