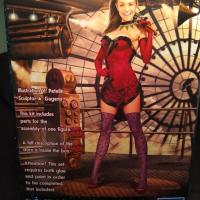 I’ve always been a huge fan of Master Box figures-- using them in vignettes and dioramas whenever I can. So when I got the email offering up one in 1/24 scale, I jumped at the chance not knowing anything about this new line. I figured I could use it with a car or truck like some of their previous lines featured. So while I was waiting for the shipment to arrive, I started doing some research.

This particular figure is part of a new series called “At the Edge of the Universe” set in a world called Steamplanet. Being a huge Firefly fan where the sci-fi steampunk meets the old West, this looked right up my alley. The back of the box provides a bit of an idea of the setting. The whole thing has me wanting either a book series or movie based on the story ideas presented in this line of figures - with additional kits featuring space security forces, ruffians, ladies, and robots.

Some of the kits feature props like bar stools or extra figures like the robots. The Irene figure does not come with any of this, but she is armed with an umbrella that doubles as a gun, and a top hat. The one sprue comes in an end-opening box much bigger than the sprue. The back of the box also features a view of all the figures in the set lined up together, as well as painting instructions and codes for Vallejo, Lifecolor, Mr. Color, and Tamiya paints.

Assembly begins with the eight parts making up her head, torso and appendages. The fit was pretty good overall-- her torso is broken up into a front and back half and the legs fit up under her bustier and everything looks pretty good. The two part right arm and hand leave a bit of a seam to deal with. In addition to these parts are two ponytails, the hat, and the umbrella gun. I painted her using Vallejo paints of my own choosing. One of the reasons I grabbed the figure was to practice my figure painting skills...and I think it’s pretty safe to say when it comes to the face, I need more practice.

Wrapping things up, I really had fun taking something completely out of my normal genre and running with it. I would really like to grab up some of the other kits in the series and I hope Master Box keeps pumping out these original themed ideas in addition to their excellent historical figures. I heartily recommend these figures and want to thank Stevens International and IPMS-USA for the opportunity to review this figure.