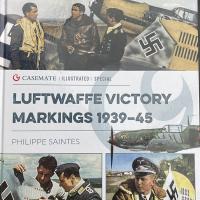 This book provides an overview of the victory markings painted on the fins and rudders of the planes of the German day fighter and night fighter aircraft between 1939 and 1945. It demonstrates how these were applied in reality through the profiles of nineteen pilots, including some of the most emblematic pilots of the Luftwaffe: Hans Troitzsch, Johannes Gentzen, Frank Liesendahl, Wilhelm Balthasar, Otto Bertram, Joachim Müncheberg, Karl-Heinz Koch, Kurt “Kuddel” Ubben, Felix-Maria Brandis, “Fiffi” Stahlschmidt, Franz-Josef Beerenbrock, Heinrich Setz, Walter “Gulle" Oesau, Max-Hellmuth Ostermann, Heinrich Bartels, "Fritz" Dinger, Martin Drewes, Egmont zur Lippe-Weissenfeld and Ludwig Meister.

Each chapter focuses on the above-mentioned pilots, describing the backgrounds and air battles through which each man received his specific victory markings. Each pilots’ story includes numerous period photos of their aircrafts, and, specifically, their individual victory marking, as well as a table listing every victory. The tables include dates, times, locations, and types of downed aircrafts. Much to my delight, one of the pilot’s biographies includes a rare photo of Minke-Pinke. If you know, you know.

An esoteric subject such as “victory markings” has been turned into a book written around to be highly informative, biographical, and downright fascinating. I can’t recommend this book highly enough.

My thanks and gratitude go to Casemate Publishers & IPMS/USA for the review sample.