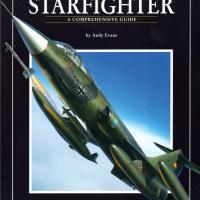 This title is No. 36 in the MDF series of aircraft guidebooks issued by SAM Publications. It is an 8-1/4 inch by 11-5/8 inch, 184-page heavy paperback book printed on high-quality glossy paper. The beauty of this book easily lies in its many photographs, both black and white and color, of the “Missile With a Man In It”, the Lockheed F-104 Starfighter. Whether a modeler or not, if you like looking at pictures of the Starfighter, you will like this book. Photos of the plane abound from the Glossary through the Appendices.

This volume contains much if not more of what a modeler should expect. The book’s Contents and examples of several pages are attached herewith. While there are a number of typos and a few errors listed in the Errata below, many that would annoy a proofreader would likely be disregarded by a modeler. They are included in this review in the hope of being corrected in a future edition, and in this reviewer’s opinion that a book with such a high quality look and feel should be error free.

The F-104 had a checkered history. It began its life as Lockheed’s legendary Kelly Johnson intended after his visit to Korea to get the opinions of the pilots in that conflict, i.e., build a relatively simple aircraft with incredible performance characteristics. It was the first aircraft to hold both speed and altitude records at the same time. It had sharp-edged wings reminiscent of the X-3 Stiletto, padded to protect maintenance personnel while on the ground; it was the first to sport a rotary cannon; the first fighter to employ the General Electric J79 engine; and was originally equipped with a downward firing ejection seat. These then-revolutionary features were not without their problems, and the Air Force operated the plane for a short period of time before relegating it to Air Guard units, yet another aircraft that was asked to do things it was never designed to do. But it essentially resurrected itself in modified form (the F-104G) and was used in great numbers by allied countries, including Canada, and in Europe, the Near-East, and Asia. This book goes to almost mind-numbing lengths to note the places, the quantity, and the variants of the F-104 built and/or flown by all the countries that used it.

One wonders how the Starfighter was selected by NATO nations over the other notable aircraft being considered at the time, e.g., the English Electric Lightning, Grumman F-11F-1F Super Tiger, French Dassault Mirage III, Saab J-35 Draken, Convair F-102 Delta Dagger and F-106 Delta Dart, Republic F-105 Thunderchief and Vought F8U Crusader. That’s one hell of a competitive list. Termed in the mid-1950s as the ‘sale of the century’, the NATO market for an anticipated 2,000 multi-role fighters drew the aforementioned aircraft manufacturers into a vigorous competition. Did Lockheed “out bribe” the other companies? What was revealed by the congressional hearings in the 1970s was that Lockheed gave large sums of cash to various countries’ high-ranking officials, those with the responsibility of choosing their aircraft. It was an underhanded yet routine way of doing business with foreign countries back then, and its revelation became a major scandal that led to corrective laws. Lockheed was the pilloried example for this practice, and the scandal caused the downfall of several foreign principals, including the Japanese Prime Minister who was jailed. That’s another story but is an interesting sidebar to the history of the Starfighter.

I enjoy learning about the history of the aircraft I build, in particular how the final design was arrived at. In its initial chapter, this book discusses the early design concepts that Kelly Johnson and the Lockheed “Skunkworks” engineers came up with that led to the F-104. Using the project numbers mentioned in this chapter, I found the early designs that are not pictured or diagrammed in the book on the Internet. I also went hunting for the competitive bid designs by Republic and North American that the Air Force had to request under fair practices. The book erroneously refers to the Republic submission as their Model AP-55, akin to the XF-91 Thunderceptor. It was actually their Model AP-54 that was submitted.

The book does reveal some facts I was unaware of about the F-104. One was the secrecy of the jet inlet half cones found necessary for supersonic flight with the J79 engines. Published photos of the early F-104As show the inlets faired over. Makes one wonder how the jets were supposed to breathe. Another was the use of not only wind tunnel but rocket-launched models to test the wings and the tail strength. I was dismayed to learn the sad truth that Korea double ace (10 downed, 11 damaged) and test pilot Iven Kincheloe, who set an altitude record of 126,200 feet (the first man into space) in the Bell X-2 in 1956, died after a downward ejection from an F-104 that had experienced engine failure. A reported 21 aircrew were killed because of this ejection system. I was also startled by the attrition rate of the Starfighters in West Germany. The chapter on International Users states that 270 F-104s, nearly 30% of the total German force, were lost in accidents, with 110 pilots killed. I doubt statistics like that would be acceptable today.

The Walk Arounds section (Appendix II) has highly detailed photos of the cockpit, fuselage access panel and stenciling of the plane, but surprisingly lacks those of the landing gear and wheel wells. This deficiency is partly remedied by the detailed drawings in the Technical Diagrams section (Appendix I). (See photo). A minor issue I had with Appendix I is that on pages 120-125 the numbered components are named, but not so on pages 126-129.

The Kitography section (Appendix IV), comprised of three pages of contemporary kits, aftermarket accessories and decals, is a nice feature. Being contemporary is a fleeting thing however and I would like to have seen the older, out-of-production kits like the Monogram, Revell, Hawk, etc., listed. These are still readily available from resellers and, while not up to present-day standards of fit and accuracy, deserve a place as a modeler’s option. Also, the Accessories list, while seemingly exhaustive, does not have E-Z Masks listed, one good source of canopy masks I have used frequently.

In Chapter 6, Modelling the Starfighter, there are descriptions of 11 fine builds of kits by Hasegawa, Eduard, Kinetic and Revell. The general consensus of the builders is that the Kinetic kit is the best overall. All but two of the builds are 1/48-scale, with one 1/72- and one 1/144-scale kit, each by Revell. The builds show some great depictions of finished cockpits and avionics bays. There are also various methods shown for weathering, examples being the use of oil washes and Uschi Van Der Rosten Airbrush Splatter stencils. Nine of the builds are European versions, with one Japanese Starfighter and one USAF F-104C in Vietnam livery.

Most good builds contain handy tips and the builds in this book did not disappoint. In addition to the splatter stencils used in a couple of the models which I had never seen before (i.e., the Branski and Torbinski builds), the Renshaw build of the Vietnam F-104C describes an alternate decal application method using Elmer’s Glue-All, a method I’ve actually used in the past as a means of not having to completely gloss the model prior to decaling. The Koervers build of a Dutch F-104G mentions his method of a once-over dry brushing of the cockpit with Vallejo Metal Duraluminum, which I would like to have seen but unfortunately was not pictured. As a fan of splinter-type paint schemes, I really liked the camo on the Ashton Luftwaffe F-104G build and was surprised at how rough the finish was allowed to deteriorate on the Danish aircraft as depicted by Torbinski’s F-104G. Among other aftermarket items, Soulleys added the DACO 1/48 Starfighter Improvement Set to his build of an Eduard ProfiPack F-104G. The Eduard kit uses the Hasegawa molds, the latter frequently criticized for the overdone riveting on the wings. The DACO set provides wings, flaps, and leading edge slats devoid of the rivets. The price of the DACO set is not listed and since at present it costs over $50, in my opinion the price should be included for readers to decide on its worth.

Note that many of the paint brands used in the builds included in this volume (e.g., Hataka, Modeler’s World, and Mr. Color) are not as widely available in the States as are Testors, Tamiya and Humbrol, the latter three being almost completely absent from mention.

My one disappointment with this chapter was that none of the builds was of a natural metal F-104. That’s what I would build if I had the honor of contributing to a book like this one.

This book is a comprehensive depiction of the F-104, primarily from a foreign (outside the USA) perspective. This is understandable as it is, after all, a British publication and the F-104 was more prominent in foreign usage. The many photographs are its best feature, although I wish it had included some of the fancy paint schemes of certain Italian planes and those of the NATO meets. How cool is it to have a tiger ripping out of the fuselage, or a cartoon cat chasing cartoon mice on a half-camo, half orange and white F-104, or a witch holding a camera painted on the tail of a recon F-104 that has stars painted all over it? Kits and decals for the latter are available and are striking. But if your intention is to build a European-camouflaged Starfighter, I do not believe there is a better reference available.

My thanks to SAM Publications and IPMS/USA for the opportunity to review it.

Many of the errors are minor but are listed to enable corrections to be made in subsequent editions of the book.