Letters from a Lancaster Gunner 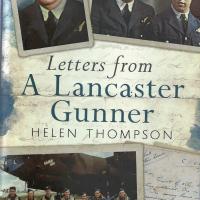 This book is not your typical historical account toting statistics, data charts, and emotionally detached accounts of RAF Bomber Command operations. I admit there is nothing wrong with those types of books- they have their place, and I have enjoyed them in the past when researching and educating myself for a build or idea. This is a narrative that is based on letters between a young, hopeful RAF turret gunner named Joseph ‘Mac’ Thompson and his family- mainly letters home to his mum. The book is written by his niece, Helen Thompson.

It is not emotionally detached and you cannot be emotionally detached when reading it. From growing up in Birmingham, through many trials of training and wartime exploits, through trying to help his widowed mum support his family and balance that with a love affair with a girl from Liverpool, one cannot help but get truly involved with the deep emotions expressed in the letters between them all. Each chapter provides a narrative of each event in the book and concludes with a photocopy of the letter that the chapter describes.

There is a small centerfold section of photographs of family, wartime snapshots of Joe and his mates and flight ops records, newspaper clippings, and technical drawings of the turrets he occupied in the frigid, night-time environs of the RAF night bombing campaign. Some of them are quite dark- but I would imagine that might have something to do with their age and the difficulties involved in copying them for the book.

I found the book to be wrenching—at one moment full of humor, and at other times- full of the fears and worries that are evident as Joe comes away from some truly tough, hair-raising missions. His mum Olive really comes through as a truly rugged woman who must balance caring for Joe’s siblings and maintaining a house and a job supporting the war effort, to worrying deeply about what her first-born son is enduring. You can see in her letters marks that could easily have been tears as she wrote deeply moving replies to her son. I walked away from the book with a much different perspective on this aspect of the aerial war over Germany. It was well worth the time invested and I heartily recommend the book to anyone looking to get a closer glimpse into night bombing and the effects it had on those carrying out operations against a Germany bound on world domination.

My thanks go to IPMS-USA and Casemate Publishing for the review sample.