Landing Gear for the HKM Lancaster B MK. 1 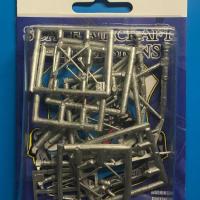 Scale Aircraft Conversions, located in Texas, is well known to be a source of high-quality white metal landing gear sets for aircraft. Visiting the SAC Home Page on the internet, SAC states that,

“We manufacture a line of white metal landing gear for 1/18 to 1/144 scale aircraft. Some sets consist of the main gear only while others include the nose gear, tail gear and/or adjacent related components. Some inaccuracies in the original kit gear have been corrected but the mounting points remain identical to the factory parts. With numerous sets we have not sought to duplicate non load bearing component parts where the factory plastic parts are reasonably accurate. “

SAC also notes that they have been in business since 1990, offering white metal and resin parts. The SAC website features a page that will help the “first-timer” to successfully install the white metal parts of the model. Look for the navigation link labeled, “Using White Metal”.

It is not an exaggeration to say that I’ve used SAC gear on, perhaps 25 to 30 aircraft models. The main rule of thumb is “the bigger and heavier the model, the more likely I’ll be making a SAC purchase to replace the kit-supplied plastic gear components.” SAC is my “go-to product” for three main reasons. First, the detail on the landing gear is exquisite, equal to that of the gear that are found in the kit. In some cases, the SAC product will include replacement parts for all gear parts found in the kit. In other cases, where the kit part is reasonably accurate and is not load-bearing, SAC does not replace such parts.

Secondly, white metal parts are stronger than the plastic parts that come with the kit. On those occasions when my project is a large aircraft, I always replace the kit gear with SAC gear. SAC always makes sure that the mounting points on the SAC parts are identical to the mounting points on the kit parts. I have never found this key point to be inaccurate or an exaggeration.  The SAC gear will extend the life of your model well beyond what the kit’s plastic gear can manage.

Thirdly, since the SAC gear are white metal, they can be reshaped with ease after travel-damage to model contests and events has occurred. My Wingnut Wings Fokker D.VII was being packed for transport to an IPMS show when (GASP!) I dropped it while trying to place it into its travel box. The fall was only about 4 inches, but the kit gear was destroyed. I replaced the kit gear with the SAC gear and during the next contest cycle, the Fokker went on to gather some awards. The SAC gear, quite literally, saved the Fokker…..since it can’t be displayed in a “wheels-up” configuration.

Now to the current product and this “out of package” review. The SAC set is designed for the HKM Avro Lancaster Mk. 1B. in 48thscale.  As with all SAC gear, this gear set is contained in a clear plastic cube which is firmly attached to a cardboard card that measures 3 ¼ “x 5”. The ubiquitous Scale Aircraft Conversions logo is reminiscent of the Strategic Air Command logo. A clearly printed label at the top of the card states which aircraft kit the SAC parts are to be used upon. The reverse side of the card contains the usual admonitions about letting children play with the parts, and provides a mailing address, a phone number, and an email address, should one wish to contact SAC.

There are 15 parts included in this set. While there is a small amount of flash on a few of the parts in this set it is not a problem. The flash can be removed with a few strokes of an Xacto blade.

Main Gear Struts - There are four parts in the SAC package that make up the main gear struts. The kit part numbers, as seen on the kit instruction sheet in Step 26 are M4 and M5. The SAC parts for M4 and M5 are easy to recognize and are not attached to a runner nor are there part numbers attached to them. Some adjustment will be necessary to get these SAC parts to match the plastic kit parts. Like other SAC parts, these main gear struts can be reshaped with very little pressure.

Tail Wheel strut – The tail wheel strut, like the main gear struts, is not attached to a runner. Of course, it is easily recognized. There’s no need to remove flash on this part as it is clean and ready to paint and attach to the aircraft.

Parts #21. There are two parts labeled #21 in the SAC product, and that matches the part number on the kit instructions.

Parts #3. There are two parts labeled #3 in the SAC product, and that matches the part number for these braces on the kit instructions.

Parts #6.  As in the two examples above, there are two parts labeled #6 In the SAC package, and those SAC parts match the kit parts labeled as M6.

SAC has a long record of providing gear sets which are well molded, an excellent fit to the aircraft under construction, and will add strength and durability to your model. This gear set is highly recommended due to the high quality of molding, and the strength and durability of white metal, and a reasonable price for the product. Thanks to Scale Aircraft Conversions for provided this item to IPMS/USA for review.