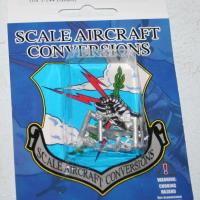 The MiG-15 was the USSR’s first really successful jet fighter. The engines for the prototype were copied from Britain’s Rolls Royce Nene, with the cooperation of the UK government.

The MiG-15 was used in the Korean War, with Chinese, Korean and Soviet pilots flying combat missions into “MiG Alley” in northwestern North Korea.

There were many users of this aircraft, 39 countries, including the United States, who bought fighters as “opposition” aircraft for exercises like Red Flag. Only two countries still use the MiG-15, North Korea and Guinea-Bisseau.

The two versions this landing gear set is for are the MiG-15bis, an improved single seat version, and the MiG-15UTI, the two seat trainer version.

You get two sets of gear parts in this set. This is very good, because you get two MiGs in the box from Eduard. The parts are all white metal, and they fit nicely in place of the kit parts.

I ran into a smallish problem as I started this review. I really like to build a model to go with the landing gear for these SAC reviews, and I didn’t have a MiG-15 UTI or bis in my stash. Then I found one of those golden shelf models that made this review a winner. I had a MiG-15UTI from Eduard that I built for a review several years ago. The plastic gear on one side had come off, I had repaired it with a glob of CA, and it was a mess. So I used the SAC gear to fix my model.

Another thing I discovered when I went to the Eduard web site to try to get another set of MiG-15 UTIs was that Eduard has discontinued the kit. (See the screen capture below.)

This part was mostly a job of disassembling the Eduard parts and installing the SAC part. I had used large amounts of CA on the gear trying to fix it earlier, and the Super Glue Remover did a great job of removing the CA from the wheel and the gear doors, which allowed me to do a reinstall.

Once I had the Eduard parts cleaned off and repainted, I was very careful about how much CA I used to install the parts.

Once I had the wheel and doors installed, the gear fit into the wing very nicely. I had to do a test fit to get the retraction strut in the correct spot, but this is one of the huge advantages of the metal parts, as they bend cleanly and stay where you put them.

Very highly recommended. The SAC metal parts are much more robust than the kit parts, and more immune to problems caused by handling the kit after construction and during movement or display.

Also, the MiG-15bis is still available, and the parts will also fit other Eduard MiG-15s.

Thanks to Scale Aircraft Conversions for providing the aftermarket parts and IPMS/USA for giving me the ability to fix a pretty nice display model.