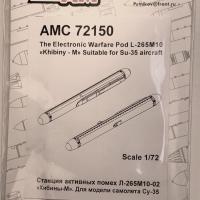 This set is designed to be used on any 1/72 scale Su-35 and as the pods are wingtip mounted, they should fit either Trumpeter or Hasegawa kit. The set consists of 6 grey resin parts for two pods and 2 each of the red and green position lights that mount out the outboard sides of the pods. This will allow you to outfit one model.

The parts are cast in a light grey resin which is of medium hardness, so it is easily cut with a razor saw or a sharp Xacto blade and sands easily. After washing the parts to remove any casting residue, I used a fine razor saw to separate the parts from the casting blocks. Each pod is cast in two parts consisting of the main body of the pod and a separate tail cap. The instructions clearly show where to cut the parts off of the casting block and if you are careful, the two sections of each pod should match up pretty well. I did not do so well on my cuts, so I ended up using Mr. Surfacer to fill the gaps.

The left and right pods are different but if you pay attention to the instructions, it much easier to distinguish between them. Once the pods have been assembled and any bad cuts cleaned up, you will need to carefully remove the small scoop that goes on the inboard side of the left pod and the small intake that goes at the front of the pylon mount on the right pod. Both of these parts are pretty tiny, so I immediately attached them to some blue painters’ tape in order to keep track of them. They were then attached to the respective pods. I painted both pods Light Ghost Grey to check for seams and as a primer. As I do not yet know what scheme I will be painting my Su-35, I have left off the position lights for now.

I really like this set and look forward to installing it on a Su-35. The cast detail is very well done and shows up well after painting. The colored resin used for the positions lights is spot on in color and wonderfully clear.