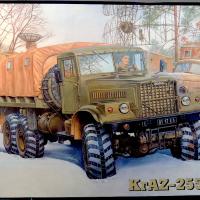 This is one ‘Bear’ of a truck and one bear of a kit! The KrAZ weighs twelve tons, has a payload of seven and a half tons, and is nicknamed ‘The Bear’. The kit will definitely not fall together out of the box on a Sunday afternoon. A difficult kit to assemble, it’s worth the effort and builds into one massive truck!

Excerpt from the instructions:

In the mid-1960s the Kremenchug automobile plant manufactured the KrAZ-214B truck in large quantities, playing a very important role in the structure of the motorized forces of the Soviet Army. This truck was assigned the role of a transporter of various auxiliary engineering installations, as well as of fuel, missile systems, etc. Considering the operating conditions of the KrAZ-214B in the territory of the USSR where normal paved roads are absent by definition in most areas (and especially where its secret military units were dispersed and as a rule they didn't exist at all), the military authorities demanded improvement in the cross-country ability of the vehicle. For this purpose the Bureau SKB-1 designers developed a new type of wheel in 1966, the VI-3. Unlike the narrow wheels of all other types then existing for Soviet vehicles, the VI-3 had a wide profile... …The KrAZ with its new wheels looked like a bear - the car became visually more massive although externally, except for the wheels, headlight,s and a new form of fuel tank, it didn't differ greatly from its predecessor. However, another essential difference of the new truck, designated the KrAZ-255B, was hidden inside, under the hood. The KrAZ-255 received a new, more powerful 'heart' - the powerful V8 YaMZ-238 engine.

Kit comes on 5 green sprues, 13 black plastic sprues, one bag containing seven tires, one clear plastic sprue, instruction booklet, and decal sheet. The number of pieces is not listed, probably for fear of scaring away timid modelers, but I estimated about 470 pieces. The green plastic pieces are generally for the truck body and black plastic pieces are for the chassis and running gear. A canvas cover is shown on the box art but not included with the kit. Painting instructions call for the chassis to be semi-gloss black and the body Russian green, which are close to the plastic colors.

Kit includes one length of black thread for the winch cable. The nice large tires are soft hollow vinyl with very nice detail and a minimal center seam. The huge tires help give the vehicle its massive scale.

Instruction booklet is 12 pages and includes descriptions in Russian, English, and German. The instructions include a diagram of the sprues showing the parts not to be used with this kit. The instructions are a little vague on locating parts and have some mis-numbered pieces. Referring ahead to subsequent steps helps to locate the parts. Paint colors are named and called out in Vallejo numbers. The instructions diagram 55 assembly steps.

Plastic parts appear to have fair detail with flash on most parts. Many parts have large protruding ejection pins. Many of the part edges are slightly raised with a sharp edge and require lots of cleanup. If you want to practice cleaning-up plastic parts, this is the kit! Many of the parts are very small and delicate. The instructions are unclear in locating some parts, many of the locating pins are too big for the holes, and some of the pins are in the wrong place altogether. It is important with this kit to dry fit every part and modify as necessary. If you’re willing to put up with the extensive cleanup however, the kit can build into a nice model of an imposing vehicle.

In assembly step 7, the fit of the springs to the brackets each side is unclear. The springs and should be inserted into the brackets #8C first before inserting part #13B. I left these is dry fit until later on so I could check to make sure they're in the right place.

The step number 9 illustration does not accurately depict how parts #23B and #2C are to be installed. Referring ahead to illustrations in steps 10 and 11 will give a better idea on how the parts should be installed. In step number 10, I installed the axle, part #16C, without glue, which will allow the wheels to turn. When installing the axle through to the wheels, the brake assembly is turned to lock the wheels onto the axle. This allows the wheels to rotate on the axle.

Steps 16 and 17 there’s lots of flash to remove from the fenders. Holes shown to be drilled in step number 16 don't match light enclosures shown in step 17. I ended up cutting off the pins on the headlamp enclosures and locating the enclosures based on subsequent illustrations.

Step 26, part #17B is shown oriented differently than in step 35. I installed it is shown in step 35, which is correct.

Steps 1 - 24 are primarily subassemblies for the chassis, and steps 26 - 35 are the final assembly of the chassis. In step 26 the rails for the chassis are individual pieces and need to be assembled with cross pieces. The rails in my kit were fairly straight and didn't present any problems going together to get a straight chassis.

In step 29 I did not install the gear transfer case until later so I could paint the entire chassis semi gloss black and then paint the gear case steel. In step 32 the cable reel shows holes in each end but there are no holes in the part so they need to be drilled out.

Exhaust pipes #47K and #40K in step 33 have a nice texture. The muffler, parts #43K and #45K, have two holes for mounting pins, but only 1 pin. None of the tailpipe sections have pins or mounting holes, which makes assembly difficult. I glued each of the pieces and while still wet mounted them to the chassis to get the correct alignment.

Step 51 is the assembly of the cab and it goes together fairly well. The doors should be used to help locate the front of the cab to provide enough clearance for the doors.

Step 52 is the assembly of the front grill. I broke both of the hood latches, parts #56A, trying to get them off of the sprue. Assembly of the gas cans in step 53 would be easier if molded solidly rather than two separate pieces with another seem to clean up.

The location of the storage cabinet, assembly 33, is not shown correctly in step 54. The support angles for the brackets should sit on top of the chassis rails and extend across to the wheel rack.

Step 55 completes the assembly of the kit with the installation of the wheels. The wheels press on to the axle and will turn.

Color and marking schemes are shown for three vehicles: Russian, USSR, and Hungarian Army. I painted the review sample Russian Green but have not yet applied camouflage or weathering.

Lots of cleanup, test fitting, and modifying parts are required. A challenging but enjoyable kit to build in spite of its rough edges. Thanks to Roden for making a kit of an important Russian vehicle. Thanks to MMD Squadron for providing the kit and to IPMS for letting me do the review