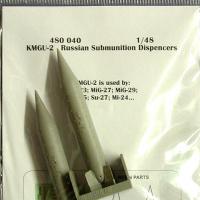 The Soviet intervention in Afghanistan in December, 1979, and the ensuing 10-year conflict tested the ways and means of the Soviet military machine. As the United States military discovered earlier in Vietnam, the tactics and weapons developed for a cold war confrontation in Europe were ill-suited for a counter-insurgency. Afghanistan became the impetus for innovation. As the Soviets shifted tactics, they relied more and more on airpower, and that spawned the need for better and different weapons. One of the most effective and widely used weapons was the KMGU submunition dispenser. The dispenser was used to scatter mines not only to interdict the Mujahedeen lines of operates and supply, but also to protect the flanks of friendly ground forces. The KMGU is a reusable dispenser that can disperse either:

In fact the system was so widely used that 20-plus years later there are still unexploded mines in the country. The KMGU can be fitted to a wide variety of aircraft, including the Mi-24 Hind.

This is a simple enhancement/addition to modern Soviet/Russian kits. There is no assembly required with this set – simply remove the dispenser from the mold block, paint, and add the decals. As is typical of all Aires products, the resin is very cleanly and crisply cast. The fins are very thin and cast in durable resin; care must be taken during handling. I did manage to snap one off during painting.

To hold the dispenser during painting, I drilled the molded hole in the mounting lug deeper and inserted a straight pin. I chose to prime the dispenser with Floquil Lacquer Old Silver, then overcoated it with Model Master Buffable Aluminum Metalizer. After polishing, I applied the decals, and here is where the set came up short. As you can see in the picture, the decals partially adhered to the protective sheet, primarily destroying the striping. During the application, I found the decals to be very thin, hard to maneuver, and prone to tearing. As a result, several of the warning stencils were damaged. I also lost two sets of stripes and was only able to put the upper stripes on each. I used Microsol to set the decals. Once dried, I sealed the decals with Future and used a dark gray wash to pick out the details.

I applaud Aires for continuing to release its ongoing series of modern Soviet/ Russian armament. The KMGU-2 is an important addition to this family. I have to say it is a mean-looking system and will look good hung on a Mi-24, Mig-27, or Su-25. Definitely recommended!

Thanks to Aires for supplying their Aerobonus set for review, and to IPMS-USA for allowing me to review it.

Dispenser on static display
Previous Next