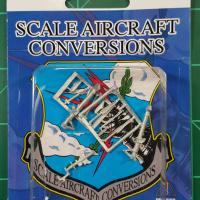 Scale Aircraft Conversions is known for making replacement landing gear for a wide variety of kits in virtually every scale in which model aircraft are available. This set is designed to replace the plastic gear in the Academy F-35A kit. The packaging says it’s for F-35A/B, but Academy doesn’t do an F-35B yet. The only F-35B kit in 1/72 that I know of currently is the Fujimi kit and these landing gear are a bit shorter and less beefy than the ones in that kit. Perhaps the guys at SAC know something we don’t.

The set includes both main gear legs and the nose gear with their separate retraction struts. The struts are very sturdy and are made to be drop-in replacements for the kit parts. The parts require very little clean up, though some parts do occasionally become a bit bent during shipping. No worries there, though, since they are very easily straightened. Recommended, especially if you want landing gear that are sturdier than the kit ones.