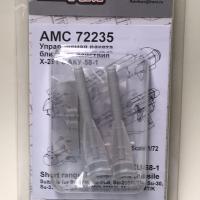 The KH-29 (NATO: AS-14 'Kedge') is a Soviet air-to-surface missile with a range of 10–30 km designed for hard-to-hit targets such as reinforced concrete aircraft shelters, runways, reinforced concrete bridges and shall ships. It has a large warhead of 320 kg and can be fitted with a variety of seeker heads/guidance systems such as laser, infrared, active radar or TV guidance. The missile is typically carried by tactical aircraft such as the Su-17M3/4, Su-24M, Su-25TM/SM, Su-30, Su-34, Su-35, MiG-27M/K MiG-29SMT and the MiG-31.

Advanced Modeling appears to be a relative newcomer to the modeling field, but their products are really good. This set is for the TV guided version of the Kh-29 family, the Kh-29T. The kit includes two complete missiles and two AKU-58-1 launch rails. Each missile is comprised of the main missile body, four resin guidance fins, four etched brass canard fins, a clear resin seeker head, and a nice comprehensive decal sheet providing serial numbers for 6 missiles. The instructions are well illustrated with a nice exploded diagram showing the construction of each missile and a separate page with the decaling instructions for the missiles, however there are no decaling instructions for the AKU-58-1 missile rails, even though the set includes a separate decal sheet for the rails.

Construction is pretty straightforward commencing with removal of the missile bodies and the other resin parts from the pour stubs. The instructions clearly show just what needs to be removed to separate the missile bodies from the pour stubs. Take care in doing the separation of the missile bodies and the rocket exhausts as these are butt-joined together to make up the rear of the missile and any gaps or unevenness really shows. I used the old vacuform trick of sanding the mating edges down on a piece of sandpaper taped to a piece of glass to help keep my sanding straight and level. Next up is mounting the forward guidance fins. The fins include small pegs to assist in mounting and aligning them as well as holes in the missile bodies to put the pegs in. I found the holes to be a little shallow, so I drilled them deeper with the fine drill bit and then attached the fins with superglue. The photo-etch brass fret includes two separate styles of fixed forward fins. One set is almost rectangular in shape while the other is more triangular. In checking the internet, the Kh-29T is fitted with the larger more rectangular fins, so I added the triangular fins to my Russian weapons parts box.

Painting is easy as the Kh-29T is overall white. I did paint the inside of the seeker house chrome silver to give a hint of the electronics behind the glass nose dome and I did a heavy black wash inside the exhaust to highlight this area. Each missile received several coats of Future and then the decals were applied. The decal sheet includes decals for 6 missiles, however, only three of them are Kh-29Ts as the others appear to be for the laser guided variant of the Kh-29T. The decals reacted very nicely to Micro Sol and Micro Set, settling right down over the molded details. In the photos I found, the Kh-29Ts appear to have a semi-gloss finish, so I sprayed them with Testors Acrylic Semi-gloss for a finish coat. The clear seeker heads were dipped in Future and when dry they were trimmed and glued into the front of each missile.

The only shortcoming of this set is that the instructions completely ignore the AKU-58-1launch rails that are included. The only things shown about the rails in the instructions are depictions of where on the rails the missiles go. There are no painting instructions or decaling instructions, even though the set includes a very nice decal sheet for the rails. I went online for photos of the launch rails to see what color(s) they are painted and where the stencils all go, but most of the photos I found did not show any stencils. I ended up painting the rails pale blue and applied the stencils where I thought they looked right. I think they turned out pretty nicely too.

This set is a really nice set and it is nice to see someone providing us with good replicas of modern Soviet/Russian weapons for the growing number of Russian/Soviet aircraft kits that have been appearing.

I highly recommend this set and cannot wait to build something to hang the missiles on!

Thank you to Advanced Modeling and Victory Models for the review sample and to IPMS-USA for letting me review it.