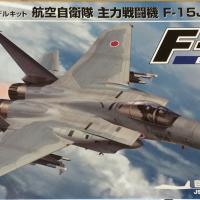 The F-15 emerged from a design study started in the early 1960s called the FX program. When the missile centered American designs of the late 1940s and 50s proved vulnerable to seemingly less advanced Soviet Migs over Vietnam, and after the unveiling of the Mig 25, the U.S. started a concentrated effort to build the next generation of fighters. Centered around the energy maneuverability theory the new designs would have very high thrust to weight ratios. That’s what the F-15 (and F-14, F-16 and F-18) would eventually achieve. Built around two Pratt and Whitney F-100 engines that allow the aircraft to accelerate in the vertical, the F-15 and associated new generation U.S. fighters outclassed any opposition at the time. In 1976 a specially prepared F-15 called the Streak Eagle broke eight time to climb records previously held by the Mig 25. A year prior the Japanese Self Defense Force came looking for a replacement for their F-104 and F-4s. Their search ended with licensing rights build the F-15J in Japan. Mitsubishi Heavy Industries built 139 single seat F-15Js. The equal of the U.S. F-15C, the Japanese F-15J only lacks some of the advanced electronics found in U.S. Eagles. Japan has made up for that with some indigenous equipment that makes these Eagles just as lethal.

This is the first kit I’ve built by the Platz company and I’ve been very impressed. The kit is packed in a top open box with a nice color illustration on the top and a four view color diagram on the bottom. Inside are eights sprues of grey plastic and one clear sprue. There’s some really cool features including full intake trunks, a very detailed cockpit, separate speed brake, and amazing exhausts built up from no less than 21 parts each. Minor ding for a seam down the middle of the canopy that needs removal, and panel lines that are a tad deep for the scale. I polished out the canopy seam and the panel lines worked just fine if you don’t put a wash in them. You also get four drop tanks (only need three), and eight missiles (4 heat seekers AAM-3 and 4 radar guided AAM-4). Instructions are a single sheet fold-out with color call-outs for Mr. Color and Model Master paints. The decal sheet is extensive providing markings for eight different Eagles.

I'll put it this way: I can’t imagine building this kit without this photo etch set (Stock Number: M72-35). The price of the single fret of parts ($16.00) is justified by the instrument panel, seat harness for the Aces II seat and the HUD frame with plastic reflectors. This set is produced by Eduard and if you’ve used or seen them before you know they are amazing. But wait!, There’s more. You also get intake ramps, fuselage mounting points for the AAM-4 missiles, interior of the speed brake, antennas and some small vents that replace molded parts on the underside of the airframe. A nice touch are the mounting plates for all the antenna replacements. They are slotted to correspond with a tab on the antennas and the system works very well. As always, the instructions are very clear as to where each part should go.

This is not a particularly difficult build but take the advice in the instructions to study them before you start sticking parts together. The cockpit is really detailed and the PE set just elevates it that much more. I struggled a bit with the ACES II seat trying to get the pieces to align but it eventually came together. There were some ejector marks in the intakes that had to be filled before assembly. The exhausts are another area that will test your patience and your eyes! The end result is worth it, as they are some of the best examples I’ve seen in this scale. The landing gear legs are built up from some tiny parts. My usual method with multi part landing legs is to glue the parts and dry mount them where they go to ensure they will fit once the glue is dry and the parts are painted. Everything has a very precise fit so if something isn’t aligning, it’s the builder not the kit. The drop tanks and missiles don’t have any issues other than the normal cleaning up of the mold seams. The fit of the vertical and horizontal stabilizers is so good you can leave them off for painting. The PE set has mounting plates for AAM-4 missile points, but if you use the missiles, I think they complicate the process - so I didn’t use them. The AAM-3 have separate front fins, but nothing difficult about their assembly. The only hassle is removing the seam from the canopy. This I did with a Micro Mesh glass paper set, and a dip in Future floor wax to restore clarity.

Like most F-15s the JSDF Eagles are painted in the two tone Light Ghost Grey and Dark Ghost Grey. I used Model Masters version of those colors, and all went well. There are some panels to mask and paint, including the bare metal sections on the rear fuselage, the vent behind the canopy, and the air refueling ramp. The bare metal areas are various shades of Alclad with some heat shading also from the Alclad line. I then airbrushed multiple layers of Alclad Gloss Klear Kote in preparation for the decals. If having every stencil present on your model is what you like, you’ll love this part of the kit. Muster up your patience, it took me a solid 9 hours to apply every decal called out in the instructions. The good news is the decals are of excellent quality. They are very thin and in perfect register - even the tiniest ones are legible under magnification. I was a bit concerned about silvering because several of them had multiple stencils captured in a single field of clear decal material. As it turned out, it wasn’t an issue. In fact, I found that a coat of Solvaset decal solution melted the carrier film into the paint leaving a perfect stencil without any silvering at all. As for the final details, the PE HUD frame becomes a focal point for the cockpit. I don’t normally use PE antennas but because some of them were broken when I received the kit (the under nose antennas were removed to close the seam there), I was glad to have them. The mounting plates made them look very realistic when installed. After sealing the decals with another coat of clear gloss, I dulled the finish with a light spray of Alclad Klear Kote Flat.

I really enjoyed building this kit. I would not recommend it for beginners, but anyone who’s built a few kits could manage it. While you could produce a decent model out of the box, the PE set pushes this kit to the next level of detail especially in the cockpit improvements. The only issue I had with this kit was the seam on the canopy. Other than that, the kit builds up to be a beautiful rendition of a magnificent aircraft. Thank you to Platz for providing the sample kit and PE set. Also thanks to IPMS for giving us reviewers the opportunity to share some of the great products like this one out there right now.