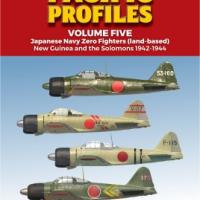 Michael John Claringbould was raised in Papua New Guinea, where he developed his fascination for the Pacific air war. During a career in the Australian foreign service he undertook postings across Oceania and the Pacific. He is author of three books on the USAAF Fifth Air Force: The Forgotten Fifth, Forty of the Fifth, and Black Sunday, and co-author of Eagles of the Southern Sky, a history of the Tainan Kaigun Kokutai in New Guinea, and The Roarin 20s, a unit history of the USAAF 312th Bombardment Group. Michael is also an associate editor of the historical aviation magazine Flightpath, to which he has been contributing articles for 18 years. He now lives in Australia.

The white surround on the Hinomaus was to be painted out to avoid "misidentification as enemy fighters" based on an instruction to field units issued on August 27, 1943. This explains the back/green outlines appearing on hinomarus.

Technical Notes: Zero Models in the South Seas. This section addresses the Zero models involved in combat in the New Guinea and Solomons area.

Page 13 has images of the fuselage factory stencils as applied by both Mitsubishi and Nakajima. Each stencil has English translations. Page 14 goes on to show top-of-wing and spinner stencil locations and translations.

Reviewer's Note: The following chapters each follow a common format, and rather than repeat that content for each chapter I offer the following. Each chapter includes some historical background for each Kokutai (IJN air group) , unit markings are discussed, several black-and-white and sometimes color period images are provided, along with left side profiles of various Zero models with descriptive text for each profile.

I found this publication to be an interesting and informative read, offering information on paint colors used on the Pacific Zeros as well as explanations of the various stencil markings. The black and white images, while many are not particularly sharp or clear, do include notes to explain the content. There are a few period color images, plus several very nice artwork images included.

My thanks to IPMS/USA and Casemate Publishers for the opportunity to review this publication. If you are interested in The Zero, this publication will offer some valuable information without going into great detail. Recommended.