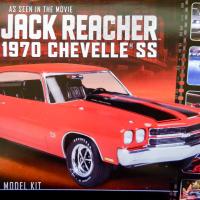 Round 2 Models, under the AMT banner, has released a Jack Reacher 1970 Chevelle SS as part of their Silver Screen Machines series of kits. The ’70 Chevelle SS was “borrowed” by the title character, played by Tom Cruise, in the 2012 movie Jack Reacher, and had a blaze of glory during an exciting chase scene. This kit will allow you to build your own 1/25 scale copy of Jack Reacher’s Chevelle.

You get a 454ci engine that can be built with a single 4-barrel carburetor (LS6) or with a fuel-injected unit. I chose the fuelie option because I liked the way it looked.

The chassis features nice detail and crisp engraving. The exhaust pipes and front suspension are molded onto the frame. The differential is separate, along with the shock absorbers. Some careful painting can bring out the exhaust pipe detail quite a bit.

The interior is just a tub with poor engraving. The dashboard is a fairly crisp though.

The body is fairly well engraved with only a little flash. Getting the grill to fit is quite a chore because the headlights are part of the grill piece. The holes for the headlights need to be enlarged before painting or you’ll never get them in. I opened the holes before priming, and I should have gone larger. Next time I’ll know better. After priming the body with Duplicolor Grey sandable primer, I shot a few coats of HOK Euro Red followed by a coat of Nason 2-part urethane clear. Only a little bit of wet sanding and polishing with Novus #2 was necessary before applying a coat of The Treatment Model Car Wax.

The kit builds up pretty nice once you get past the flash. The Goodyear tires in this kit are great. They’re hollow and tampo printed. Just gorgeous!

Round 2 needs to be thanked for producing and supplying this kit, and thank you to IPMS/USA for the opportunity to build and review it.