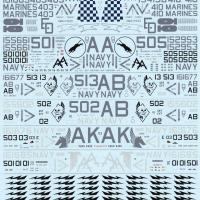 AOA Decals has expanded to 1/72nd scale and their second release is a set of markings for the Fujimi A-6E TRAM covering all three Intruder squadrons involved in the strikes against Libya in March and April 1986 as part of Operation Prairie Fire and Operation El Dorado Canyon respectively; also covered are two squadrons in 1991 from Operation Desert Storm. Inside the package, there is one 5.5 x 7-inch decal sheet printed perfectly by Microscale; full color profiles for all eights aircraft; full weapons and load outs specific to each plane; top profiles for each plane and also instructions for the decals for crew helmets, fuel tanks, tailhooks, formation lights, ejection seats, VA-35 MERs, & VA-55 special ordnance markings.

The Aircraft covered by these sheets are:

All the schemes are low visibility schemes. Notes are included as to paint schemes and other markings such as stenciling which was not used on the Desert Storm planes. Each specific profile has notes about that specific plane and includes detail when confirmed and notes any specific that cannot be confirmed.

These are fantastic decals covering some historic planes and missions. The addition of weapons loads and helmet markings plus notes on each profile give the modeler excellent reference material and a wonderful sheet made by Microscale. Highly recommended.

My thanks to AOA Decals and IPMS/USA for the opportunity to review them.