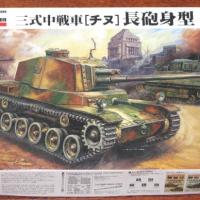 Fine Molds continues to add to their great line of WWII Japanese Armor – this time with a variant of the Type 3 “CHI-NU” Tank. This up-gunned long barreled version of the Type 3 was a paper-only project. The variant was expected to go into production in 1946, but as we know the war ended before then. It was thought that the gun on the Type 3 would not be sufficient to knock out US Armor at long ranges, so plans were drawn up to fit the Type 3 tank with a long barrel 75mm gun.

This kit is exactly the same as the other Type 3 “CHI-NU”, with the addition of the sprues for the longer barrel, and turret parts. In fact with this boxing, you will end up with some extra parts for your stash, as some of the parts from the earlier release are included, but not used. The kit’s 203 parts are molded in tan, with a sprue of clear parts, and nicely done ‘rubber band’ tracks.

Construction of the kit is simple and straight forward. I encountered some minor injector marks, which my OCD forced me to fill in. It turns out that it wasn’t necessary, as they were all hidden during the construction process. My references are lacking when it comes to WWII Japanese Armor, so I built the kit out of the box, and followed the directions as far as painting and assembly. There were no fit issues, and everything literally fell into place. I had the entire projected assembled & ready for paint in a weekend.

The detail of all of the parts is very good. Included in the kit is a small clear sprue which contains the two headlights, the tail light, and vision ports for the commander’s hatch.

The only construction issue I encountered was when gluing the tracks – and that was my own error. I used a little too much glue (or the glue was too “hot”) and I melted off the thin tab. No worries, as a little careful clamping and a little more glue repaired the break – and you cannot even tell where the seam is. This was my first experience with glue-able track, and I have to say I like it!

Markings are included for three fictional paint schemes for the CHI-NU long barrel. One with camouflage pattern of Earth, Grass Green, and Parched Grass – colors all from the GSU Creos “Mr. Color” line (sold in a set). The second scheme is a solid Parched Grass, and the third Olive Drab. I chose to paint my project in the Parched Grass scheme. Decals are included for some tank regiments, so you can pretty much mix and match to get a look you want. After a little weathering, the project was complete.

I highly recommend this kit to anyone with an interest in WWII Japanese Armor. The fit is great, and I experienced no issues whatsoever with the construction. It was a fun build, and one that someone with a little armor experience under their belt can finish up quickly, and with great results.

For those of you who may want a little more detail, Fine Molds sells separately two detail parts for this kit: Item MG11 is the “IJA Type 3 Medium Tank Extra Detail Set (PE parts) and item MG70 is an aluminum replacement barrel for this long barreled version. I like the looks of the tank as-is, but may look for the PE set for the next one I build.

Thank you to Dragon USA for providing the review samples!