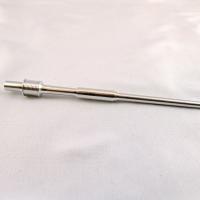 Editor's note: The following review was purchased independently and submitted for review by the author. Should you have an interest in the product you will need to purchase directly, as noted in the review.

The history of this gun goes back as far as 1980. The Israeli’s had these mounted in M113 series vehicles as well as several wheeled styles. For one reason or another it never really took off. However, the Chilean army purchased several upgrade packages for their aging M-50s (supplied by Israel) and their M-24s. These guns and Fire Control packages were relatively cheap compared to other offers and had an incredible amount of hitting power for the size of the gun.

Up until several months ago, there was only one option to own an IMI 60mm HVG or HVM (as it is sometimes referred to). You had to buy the Verlinden Israeli 60mm HVMS Turret conversion (VP0370 [Now OOTB]) or attempt to build your own. Not anymore. Thanks to Greg Buechler, there is now a third option. Just drop him an email, send him some cash and he will hook you up. It’s that easy. Shipping is a flat $6.00 for any quantity of barrels. I got two; one for my HVMS and another for a Warhammer 40K Vindicator.

Greg is a fellow TreadHead and a dyed in the wool Shermanholic! His “down the road plans” included building EVERY Sherman variant out there and doubles of some others. He didn’t like the Verlinden option and after doing some calculations, the Verlinden Barrel is very “out of round”. He broke out a paper and pencil and drew up an IMI barrel and got a friend to do a 3-D autocad and then took it around to some machine shops to see what could be done. The result is beautiful. The aluminum turned barrel is a one piece affair and features a well defined bore evacuator, recessed business end, and the baffles or bellows common to the installation.

These cannons can be used in a multitude of applications. The IDF did use it on several vehicles, the Chilean Army uses it on their M-50 and M-24 vehicles and are currently trial testing a version on the Piranha. The design firm OTO appears to have offered the gun on a Dardo IFV chassis other countries as well. Finally, there are several Warhammer 40K vehicles that this would look very awesome on as a main armament. The review pictures are of the barrel by itself and mounted into the Dragon M-50 Mantlet.

I want to thank Greg for basically doing all the work and allowing us all the pleasure; my wife for allowing me to purchase these, and IPMS/USA for a posting this review to keep fellow TreadHeads informed on a really cottage industry weapon that can now help make some really nice conversions very easy.

Barrel mounted into the Dragon M-50 Mantlet.
Previous Next