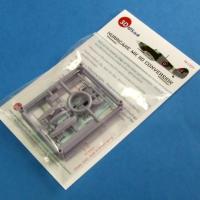 To counter Axis armor, the British introduced a tank busting version of the Hurricane. Armed with two Vickers 40mm cannon they had the same effect as an armor-piercing rocket, but were four times more accurate. First fitted to the Hurricane as the Mk IID, they were also used on the later Hurricane Mk IV. Hurricane IIDs saw service in North Africa, the Far East and in the UK.

In this conversion kit you get two sprues with six flash free parts in medium gray plastic. The parts can be used with any 1/72 Hurricane Mk II on the market today. The instructions show you all the changes you need to make to the kit Mk IIc wing to convert it to a Mk IId. You also get a small decal sheet covering three marking options. The options include No 6 squadron (April 1943), No 6 squadron “Our John” (August 1943), and 1st Specialized Low Attack School. There a no national marking or stencils provided you will have to get these from the base kits you are using or from another source. The decals you get are in register and cleanly printed which include serials and codes. You get a color header card that provides the painting guide and decal placements.

The only ways to get a Hurricane Mk IId are from the ancient Airfix Hurricane, Hasegawa Hurricane Mk IId (no out of production), and the AZ Hurricane Mk IId/IV. The 3D-kit is useful in that you can convert any Hurricane Mk IIc you already have in your stash with little effort and without shelling out big bucks. I recommend this conversion to all without reservation. It will make a great first attempt at using a conversion kit.

I would like to thank 3D-Kits, and the IPMS USA reviewers’ corps for the opportunity to review the Hurricane Mk IId conversion.

Close-up of parts on sprue