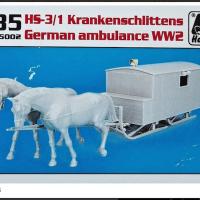 The Krankenschlittens was one type of a variety of German Ambulance used during WWII. In this example, Hauler has given us a horse drawn sled type. The ambulance consisted of a shed constructed on a wooden frame with sled runners underneath drawn by a two-horse team.

Hauler has replicated this rare piece with 32 excellent resin parts and a photoetch frame of 40 pieces in 1/35th scale. The resin is perfectly cast with no issues. There are significant casting blocks that need to be removed. To start, I removed all the of the resin pieces from the casting blocks. The smaller pieces were easy. Take your time with the pieces for the shed- it needs to be square and I slightly over sanded which caused a lot of work. The most difficult part to remove is the poles that go out in front. They are remarkably cast but have lots of pour around them. Take your time and they will come out. All the parts were sanded and then washed and we could begin construction.

The front and back sled runners are first. These are glued together and need to be square so take you time and get them parallel. One thing I did notice was that each set of runners called for a brace of part R4 however only one part R4 is included. I passed this on to the fine people at Hauler. No worries in that it took a couple minutes to replicate the part with plasticard. With the resin done, 12 photoetch braces are added. Fit is superb and this went quickly. The last two things with the runners were the pivots for the poles between the horses. Take your time and they will allow the poles to pivot. Last, the brackets for the horses to attach to the sled. For these, instead of using the photoetch parts, I drilled holes and used wire to form the loops for strength.

Next up is the shed and this is simple. I made a jig to hold one side and got the bottom and all the walls square tacking them in place. Once the walls were all up, I added more super glue and glued it permanently. The top and a couple photoetch details were added as well as the front seat, which had a nice wood texture.

Lastly, the horses were built. I had to rebuild two of the ears from Apoxie Sculpt- they snap off easily and I dropped them at least once each. The tails were added and the seams smoothed. At this point, all the subassemblies were primed with Alclad gray primer.

The sled runners and shed were base-coated their actual colors first. The shed was steel, the base and front was wood, and the runners wood with steel braces. This was sealed, a light gray sprayed, and then a white highlight. I then used fine sandpaper to wear off the white and allow the base colors to show. I wanted a worn look. I then sealed again and added brown washes to the panel lines and rivets as well as a heavy wash to the runners. A few scratches and the work was sealed. The runners were then added to the shed and left to dry.

The horses were painted and then highlighted with different browns. They were sealed and pastels used to darken the muzzle and feet as well as creases in the musculature. This was sealed, the leather harness painted along with eyes, mane and tails. These were then sealed.

When it came time to attach the horses, I wanted this to be more substantial as the kit has the horses rigged correctly and for real where they are loose which would have made the whole assembly hard to move. I pinned the horses together with a black bar and attached the bar to the poles. The rigging of the harness and attachment to the sled were left. I wanted to use metal foil but the ones I had were too thick and looked wrong. In the end, I used Tamiya tape. I added the attachment rings and painted the straps leather color. These were glued on and tacked into place. The entire kit was given several coats of Dullcote and done!

I took several pictures, but couldn't resist adding it to a quick winter diorama with an HS-129 and it looked fabulous. I will give this kit a highly recommended, but to those with some resin and photoetch experience. There are many tiny parts that are added and some experience would be helpful. This is a wonderful kit and I would like to thank Hauler and IPMS/USA for the chance to review it.