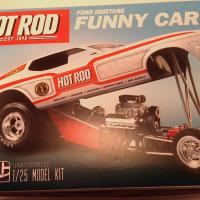 Round 2 continues to re-release some of those oldies some of us loved way back when. For builders like me this truly is a second chance. I was not a car builder when these kits were initially released. This time we get a release with a twist. A Hot Rod Magazine inspired, Hemi powered 1972 Mustang. The twist is a coupon good for a year of Hot Rod Magazine when sent it in with a purchase receipt for the model. As for the model, you get about 60 parts molded in white, black, clear and chrome. There are two deployed drag chutes you can wire to the back of the car. I don’t see how that works since there is no driver included in the kit. The rear slicks are pre printer with a Goodyear logo. The instructions do not include any color callouts but the box top photos show some suggested colors. I say suggested because this appears to be a fictitious car created to (along with the subscription offer) promote Hot Rod magazine. The kit is a re-pop of the Connie Kalita Bounty Hunter, also released by MPC.

I started by striping the chrome parts with easy off oven cleaner. I really wish companies would not bother with chrome parts or offer a run of kits without it. The chrome process requires a heavy clear coat to give a smooth surface for the chrome. That varnish fills a lot of detail and it’s hard to remove. Once that was done the kit went together fairly quickly. I added some ignition wiring and fuel lines as well as instrumentation wiring. Construction is greatly helped by the one piece frame.

The body is a one piece casting in white. After some minor sanding to remove mold lines it was ready for paint. I used Tamiya TS-1 Pearl White. The decals look real nice on the sheet and worked as well as they looked. The long red stripes on the car sides were a bit tricky. One of them started to split when it unrolled in the water, but it went on fine and I was able hide the break. I used the box photos as a placement guide. After the decals dried, I over coated with Testors “Wet Look” enamel clear. It yellowed the white finish a bit but it looks alright. All that was left at this point was the windshield, internal fire shielding and the wheelie bars. The wheelie bars on my sample were warped. Mounting the body on the frame is a flimsy affair but the good news is the body fits over the engine when it’s lowered. This doesn’t always happen on funny car kits especially if you wire the engines.

I really had a great time building this kit. In fact, once I started it, I didn’t work on anything else till I finished it. This is a good starter kit for anyone who’s never done a funny car before. The one piece frame really speeds up the build and keeps everything aligned. The decal graphics really look great on the model. Add to that, the free one year subscription to Hot Rod magazine and you’ve got a great project that comes with a reference source. Round 2 recommends this kit for 10 years old and up and I would generally agree with that. Thanks as always to the folks at IPMS who allowed me the chance to build this kit and to Round2Models for providing the sample.