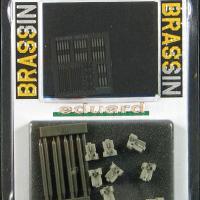 High Velocity Aerial Rockets, or HVAR, were used by the US between 1944 and 1955. This six-foot long rocket was 5 inches in diameter and carried a 45lb HE warhead. Unguided, it could be fitted to almost any aircraft with hard points and was used extensively on most late war fighters, patrol, and attack aircraft, and into the Korean war on jets like the F-86 and F-84. Retired in 1955, it became the precursor to the modern Zuni and other unguided ground attack rockets.

For most modelers, we all will spend lots of time and energy detailing the aircraft to the max, yet when we get to the ordnance, we are left wanting by the kit-supplied items. HVARs tend to fall into this category, ranging from bare likeness with fins to better looking but still not up to the same standard as the rest of the model.

Eduard comes to the rescue within their Brassin line and provides a fine set of HVAR rockets. Designed and molded with the latest technology, they will satisfy the need for detail.

The parts come in a blister pack similar to Aires sets, with the resin parts sandwiched in the larger compartment with some foam rubber and the photo etch separated and backed with paper. In the set you get eight rockets total, and all the needed hardware to hang them, including mounting lugs and ignition wire for the rocket motor. The fins are molded as a unit which is then added to the rocket body. Casting is blemish-free, and the detail is very crisp. My only complaint was that a few of my rocket bodies were slightly warped, which would necessitate a warm water dip to get them back straight.

I started by removing the casting block from the fin units. This was done by gently cutting behind each fin with a razor saw, then using a sharp X-acto to remove the block from unit the rest of the way. A few swipes with a file and they were ready. The bodies were removed from the casting block by using a razor saw and starting a cut on at least two sides, being sure to remain square. Then I proceeded to cut from a third side, using the two previous cuts as a guide. This helps keep the saw square while finishing the cut. Another few swipes with the file and the end was clean. A drop of glue on the end of the body, and then mating with the surface of the fin unit, and the resin parts were done. A small etched part is inserted into the nozzle to replicate the rocket motor. After adding a drop of glue to the recess, the etched part was pushed in using the end of some plastic rod. The mounting lugs are also small, and require tweezers to fold. I folded up the square lug portion, then wrapped the straps around the rocket body, pinching the ends together with tweezers. For my build, I didn’t glue them into position yet as I am not sure what aircraft I am going to hang them on. However, you can adjust the position to fit your own needs and glue them into place. Assembly is delicate and may be a bit more than you are used to for most kit-supplied ordnance, but the result is worth it. I would say I spent around ten minutes per rocket…I’ll be doing only a few at a time!

I was curious how they looked against some HVARs supplied in Hasegawa’s late model Corsair kits (F4U-5, AU-1, F4U-7). I was a bit surprised to discover that the Eduard rockets looked short, or so I thought. A quick check with the scale rule, and it appears that Eduard Brassin is the correct six foot length while the Hasegawa are about five inches too long! Also, there is far more detail around the fins and rocket motor on the Brassin items.

I really like what Eduard and Aires are doing with these sister product lines. The Brassin HVAR are very well priced, being right at $10.00, and really are far better than anything in plastic. They will complement any HVAR-equipped aircraft with some very detailed and accurate rockets. Thanks to IPMS USA for the chance to review these and Eduard for supplying the sample!

With and without clamps

Comparison with kit part
Previous Next