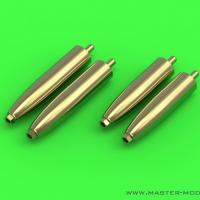 The Hawker Tempest was a British primarily used in the RAF in WWII. The Tempest is a derivative of the Hawker Typhoon, intended to address high altitude performance. The updated design had a new thinner laminar flow wing. Having diverged considerably from the Typhoon, the aircraft was renamed, Tempest. The plane proved to be one of the most powerful fighters of the war and the fastest single-engine propeller-driven fighters at low altitude. Entering the service in 1944 the Tempest was used as a low altitude interceptor, particularly against the V-1 flying bombs and as a ground support aircraft, in operation Market Garden ( D-Day). Later targeting the German rail infrastructure and Luftwaffe aircraft factories. The Tempest was effective in low-level interception role, including the M-262.

Model-Master has always produced fine turned barrels. Upon inspection, the cannons have nice details. There is a locating pin on the end of the barrel which when fitted into the wing and keeps the barrels from drooping. The Master-Model versions are slightly larger the plastic units, so there needed to be some modifications to the wing. T modification. Drilling out the was a simple process, once done the fit was excellent. Make sure not to drill to deep, if you do you can hit the small locating hole for the pin that is machined on the cannon. Now I installed the with cyanoacrylate adhesive make sure you align them. Next was paint and your finished.

I would recommend these.

I would like to thank Master-Model and IPMS for the opportunity to do this review.