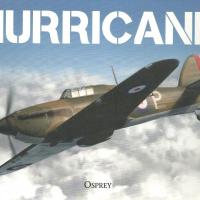 Osprey Publishing just released a new book devoted to the Hawker Hurricane, the work-horse of the Royal Air Force during War World Two.

This book has a new format; it is about 5 inches tall and 8 inches wide. I think it is the first one from Osprey that has this shape. But don’t let the relatively small footprint of the book fool you. With 136 pages, the book is packed with useful information.

The first two chapters are extremely high-level description of some of the major milestones of the aircraft. The following three chapters (Design and Development, Technical Specs and Mark by Mark) are where the airframe, engine and weaponry of the airplane is broken down and described in detail. I particularly enjoyed the “Mark by Mark” chapter. I wish line drawings would have been included to visualize the changes as described in the text.

Finally, the Combat Operations and Hurricane Aces chapters cover in really good detail the operational history of the Hurricanes, not just in RAF and Royal Navy service and also by foreign users or in distant locations, like in the Far East or the Mediterranean. After reading those two chapters you have a clear understanding of all the different fronts where the Hurricane served and the real contributions of this workhorse to the Royal Air Force during World War 2.

The author and the artists have done a superb work providing good level of detail, great color artwork, pristine period photos in an easy to read format.