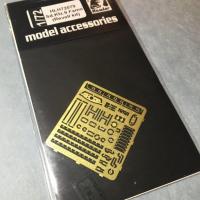 Hauler produces photo-etched and resin upgrade sets for armored fighting vehicles (AFVs), airplanes, cars, railway vehicles, and dioramas. They also produce a few resin kits. Their products are in most of the common scale sizes, 1/72, 1/48, and 1/35, but they also have items in common railroad hobbyist scales.

This small sheet of photoetch provides upgrades to Revell’s 1/72 Sd. Kfz. 9 FAMO (03141) kit. The Revell kit is nicely detailed on its own, but for those of us wanting to reallydetailthe kit, Hauler provides this nice set of photoetch. The photoetch comes with a small instruction sheet listing each Revell part number to use, and instructions on whether something needs to be modified or replaced entirely. The instructions are simple and easy to follow.

The majority of photoetch parts on the sheet replace handles, latches, and eye hooks found literally all over the vehicle. In fact, the small sheet includes replacements for 54 handles, latches and eye hooks. Since the Sd. Kfz. 9 was the heaviest prime mover in the German army during World War II, it was a real workhorse and had tie downs and handles located all over the vehicle for storing and securing equipment and cargo. The Revell kit replicates the handles with lumps or strips of plastic molded to the various panels and doors on the vehicle, so replacing these parts is going to require removing 54 plastic pieces of varying size, but most being extremely small. Although tedious, I must admit the end result looks much better, even in 1/72 scale.

In some places, I chose to keep the original Revell piece intact. One example is the driver’s dash and instrument panel. Revell has detailed in plastic, a nearly identical representation as what is provided by Hauler. The Hauler instructions have you cut off the plastic dashboard and replace it with a photoetch piece and a small sheet of film for the dials and instruments. I choose to keep the original part in place and avoid the unnecessary cutting. I also did this with the windshield wipers. The photoetch ones were nearly identical to what was provided on the kit part, and rather than deal with the cutting, gluing and cleanup, I just left what was there in place.

One really nice additional feature is actually the simple “FAMO” logo for the front of the grill. Fahrzeug- und Motoren-Werke (Automobile and Engine Works), also known as FAMO, was a German automobile and truck manufacturer prior to and during the war. I guess Revell was concerned about copyright or trademark issues, and left this relatively simple, but important detail off their kit. Hauler provides this addition, which on the original vehicle would have been as obvious as a “Chevy” or “Ford” logo on the front of a modern heavy-duty vehicle today.

Overall, the additional photoetch makes a nice upgrade. There are two areas that I think the kit parts could have been improved with some additional photoetch that are not included in the Hauler kit. Being a support and recovery vehicle, there are a number of pioneering tools molded to the plastic kit parts. Replacements for these parts would have been a nice addition. Also, the kit provides a decent replica of the big Maybach engine on the original FAMO, however the engine is somewhat bare. There are many pictures of the FAMO missing the side panels of the hood over the engine, and being able to detail this part would really enhance the display potential for the kit.

I’d recommend this kit for experienced builders looking to really detail their build. A number of the parts are extremely small and there is a fair amount of cutting and sanding in a number of tight spaces to do on the parts.

Photoetch handles on side panels