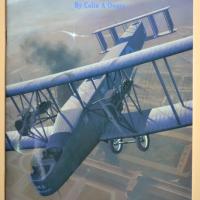 All jokes aside, the Handley Page V/1500 was proof that in some situations size does matter. At the time when military aviation was still somewhat in its adolescence, the controversial idea of dropping a significant bomb load on an enemy target 500 miles away (and flying over a substantial body of water in the process) meant finding an appropriately large and powerful aerial vehicle to carry out the mission. The Germans had used huge zeppelins to bomb London, but some in Britain believed it a better strategy to use an aeroplane to return the favor. Thus was born a scheme to build a ‘Super’ bomber…actually a ‘Super’ Handley Page bomber, capable of carrying up to 30 250-lb. bombs.

Centenary Datafile 164 tells the story of how the enormous four-engined Handley Page V/1500 bomber was conceived, developed, built and tested in less than a year to satisfy the grand plan. Author Colin A. Owers' goes about doing this in his familiar way of blending a thoroughly researched and well-written history with a treasure trove of archival photos, technical drawings and color profiles to deliver the story in 36 pages. Ironically, when this Royal Air Force behemoth was all set to make a series of raids on Berlin in late 1918, news was received that the Armistice had been signed and the eager crews were ordered to stand down. But, there is much more to the story and the author presents the complete history of the bomber's career in depth, with the aid of over 60 period photos and contemporary sketches plus detailed appendices. Artist Robero Zanella adds a dramatic rendition of a postwar bombing raid on the front cover and Ronny Bar contributes six full color profiles that adorn the inner and rear covers.

Typically, each Datafile includes a full set of scale planes in both 1:48 and 1:72 scale. Because of the V/1500’s great size however, the usual 1:48 scale Datafile drawings by Martin Digmayer could not be fitted into the publication’s standard size, so 1:72 scale plans are included to convey the mammoth proportions of Britain’s first ever 'heavy bomber’…including drawings of its unique folding wings.

The Handley Page V/1500, the RAF’s last (and largest) WWI bomber, is a perfect follow up subject to Centenary Datafile 163’s subject, the early war (and quite delicate looking) BE2 series.

It is important to remind longtime readers of Albatros’ DATAFILE series that the Centenary Datafiles are now published on a quarterly schedule.

This publication is highly recommended to WWI aircraft model builders and those with an interest in WWI aviation history. Thanks to Albatros Productions for providing the review copy of this excellent publication and IPMS/USA for the opportunity to review it.