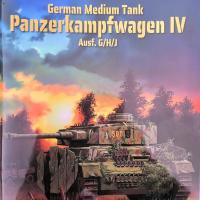 For all fans of the most produced German Tank of WWII, the Panzer IV, Michaէ Kuchciak and the folks of Kagero have put out a wonderful book on the final three variants of the tank. The 80 pages are filled with line black and white photos, drawings, eight pages of color side view lithographs, and an enclosed lithograph of an Ausf. H vehicle. Filled with history and technical details, I can highly recommend this new offering from Kagero in their in-Combat line!

With the recent releases of the Panzer IV in kit form, this well-timed publication will provide plenty of inspiration and information for those who build one of these kits. Starting with “Battaillonfűhrerwagen”, the book describes tank development following the signing of the Treaty of Versailles in 1919 in the early 1930’s. After a series of tests in 1935 and ’36, the initial designation for production vehicles was 7.5 cm Geschűtzpanzerwagen (Vs. Kfz. 618), which was later redesignated as Panzerkampfwagen IV (7.5 cm) Vs. Kfz. 622 and allocated ordnance inventory number (Sonderkraftfahrzeug) 161 or Sd. Kfz. 161. The book then goes on to describe the Pz. Kpfw. IV Ausf. F2/G (Sd. Kfz. 161/1), the simplified design Ausf. H (Sd. Kfz. 161/2), and the final version Ausf. J (also Sd. Kfz. 161/2).

An organization of panzer units and brief combat history is next and is followed by camouflage and markings, export, conclusion, a selected bibliography, and end notes. After the eight pages of lithographs in the middle of the book, 1/35, 1/48, and 1/72 scale line drawings of the Ausf. J fill six pages before returning to more photos. Tables on the comparison of the guns used in the Pz. Kpfw. IV tanks; long-barreled tanks in service in June and July of 1942; long-barreled tanks in service on the eve of Operation Zitadelle; comparison of key technical and tactical characteristics of the Ausf. H-J, T-34, and M4A1; and tactical and technical characteristics of the Ausf. F2/G, H, and J provide a wealth of information themselves.

The photos show the tanks in service, knocked out, captured, and even being transported on a trailer in one instance. Views of the transmission, engine, and turret interiors are provided, which will be useful for anyone who has a kit with the interior included. Modelers who enjoy constructing dioramas will find plenty of inspiration in many of the in-action photos.

Unlike the other Kagero publications in my library, this version is written entirely in English, so additional space is not taken up with foreign text, well, foreign to me. As I stated up front, this book is a great addition to the libraries of Panzer IV fans and modelers alike! The production quality is top notch, and the added lithograph can easily be framed and displayed. With no misses that I could identify, I highly recommend this publication!

I always like to wrap up by thanking the person in charge of the Review Corps, so hats off to Phil Peterson for his work, and to the folks behind the scenes like Bill O’Malley, who mails out the lion’s share of the review items, and the folks who place our reviews on the IPMS web site. In closing, a special thanks to the folks at Casemate for providing this book to the IPMS-USA for review.