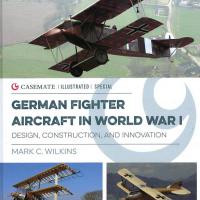 Nowadays, when we think of cutting-edge aviation technology, things like stealth materials, satellite guidance and pilotless flying come to mind. But what was the cutting edge one hundred years ago, at the dawn of aviation? How about hinged ailerons, or steel tubing, or cantilevered wings? For better or worse, warfare spurs innovation, and by the time of the Great War, the needs of the conflicting Great Powers for the decisive weapon, coupled with the cutthroat nature of industrial competition, spurred aviation innovation at an astounding pace.

Author Mark Wilkins chronicles the efforts of eight of the major German aircraft production companies that produced fighter aircraft - Aviatik, Albatros, Fokker, Halberstadt, Junkers, Pfalz, Roland and Siemens-Schuckert - with a great deal of detailed technical information. He provides numerous examples of innovation, like descriptions of the early Taube’s wing design as directly related to the “winged” Zanonia seed (as well as the fact the Taube (Dove) was designed in several versions and built by a number of different aircraft companies); or how German aircraft were designed with quick breakdown and reassembly of major components foremost in mind, since aircraft were nearly always sent to the front by rail or wagon; or how designers were constantly experimenting with new materials like steel tubing and thin overlapping plywood strips to quickly progress from the ungainly stick, wire and fabric “boxkites” to streamlined and perfectly functional machines that would continue to influence aircraft design for years to come. Much of the descriptive text is quoted from contemporary writings like Flight magazine.

He balances the technical descriptions of the aircraft with equally colorful descriptions of the designers and industrialists who created them. The influence of politics and personal relationships of designers, pilots, government officials and the military hierarchy all contributed to who succeeded and who failed. The ability of the various German manufacturers to incorporate innovative advances from their adversaries (whether they be the Allies or their industrial competitors) helped determine the level of success (and profit) throughout the worsening war years. And this is also a story of how an industry evolved from a few highly skilled craftsmen (usually coach or boat makers) hand making individual airplanes one piece at a time, to assembly line production combining woodworking, metalworking, textiles, engine mechanics and arms.

But more than anything else, this is a highly illustrated volume packed full of images, from a wealth of period photos and drawings, such a numerous company and patent drawings, to current photos of restored museum aircraft and beautiful newly build replicas, showing details of construction and materials. The photos are complimented by 10 of artist Ronny Bar’s striking aircraft profiles.

For someone like me, with only a superficial knowledge of the history behind Germany’s WWI fighter aircraft, this book provides a treasure trove of interesting information. Author Wilkins successfully walks a fine line between abundant technical details and interesting storytelling. As a modeler, it gives me a new insight on why those wonderful Wingnut Wings aircraft models look the way they do, and why they provide so many “alternative” parts. This book is a well of knowledge that I’ll be going back to often.

Thanks to Casemate Publishing for providing IPMS with this review copy.