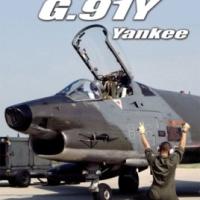 As with most fighter aircraft, they tend to get heavier as the user needs more capability than the original design can deliver. In this case, the light weight G.91 needed more range, loiter time and weapons. Enter the G.91Y. Going from a single engine to two engines, the G.91Y nearly doubled its empty and max take off weights while increasing range and navigational capabilities. External ordinance capacity increased from 1000lbs to 4000lbs. Like its predecessor, the G.91Y also competed against some of what the world had to offer in 1965 but in the end only the Italian Air Force used this aircraft. The “Yankee” version of the G.91 would serve from 1966 to 1995.

This title follows a format established by these authors in numerous volumes on aircraft in Italian service. The text is written in Italian and translated into English. It provides context to collection of photos of this airplane in service that include details of the inner workings. One page is devoted to color side views which is adequate because only 30 of these aircraft were built and served in just two groups. The last few pages are devoted to the modeler and include a rundown of the three available kits, a build of the Italiankits/Cunarmodel resin kit and some color detail photos that weren't covered elsewhere in the book. There is also a color guide referencing several different paint brands.

This is a great reference book and essential given the work that will go into making an accurate G.91Y from what's available out there. Highly recommended reading for what is one of the last fully indigenous designed and built Italian combat aircraft. Thank you to Casemate for the review sample and to IPMS for a complete (see my review of the G.91 PAN R/T models) reference library for this significant aircraft.