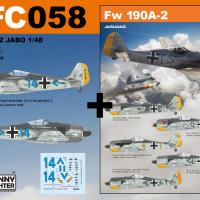 Eduard has hit a major home run when they went back and redesigned their FW-190 series of kits. The latest version is the FW-190A-2. In my case, I had the Bunny Fighter version which includes decals for Oblt. Frank Liesendahl.

What is the Bunny Fighter Club? It is a discount for buying directly from the Eduard webstore. It is a 15% discount on all items. It also allows the modeler access to special and limited edition releases, both kits and accessories. When you visit a show where Eduard is vending you get an additional discount. You even get a T-shirt and finally if you attend E-Day you get free entry into the show.

The BFC decal instructions are available on the Eduard webpage. The only downside to this release is that this particular marking option does not show up in the instructions as to which bomb rack is required. You’ll have to figure out which holes to open and build up the bomb and rack.

So since this is the ProfiPACK boxing there are actually six sprues of grey plastic. There is no flash on the parts. Three of the sprues are the ‘standard’ sprues for the Eduard Focke Wulf kits. You get the option of either a two or four gun wing and each is on its own sprue, so one of them will end up in the spare parts box. The other sprue is the unique fuselage of the FW-190A-2. A sprue of clear plastic is included. One thing that is unique to this boxing is the inclusion of the Brassin inner gear doors.

As it is an Eduard kit there is photo etch. A pre-painted photo etch fret is simply beautiful. There is also a set of masks included.

The decals are printed by Eduard. The standard FW-190A-2 kit includes two decal sheets. One sheet is just the stencils and the other one is the individual marking options. Since this is a Bunny Fighter Club release there is an additional sheet with the additional markings for Leisendahl’s aircraft.

The instructions are printed on high quality paper in full color and are easy to understand. Color call outs are in Gunze and Mission Model paints. So I thought I’d try the Mission Models for the exterior. There are five colorful marking options. Well colorful if you like RLM 74/75/76. If I didn’t have the BFC boxing I would have built Siegfried Schnell’s machine with the Eagle crest on it, but since I wanted to see how the BFC decals worked those decals will be the ones I use.

Now let’s see how it builds up.

The cockpit is the starting point for the kit. You have to decide if you want to deal with the photo etch or plastic or decals. I elected to use the photo etch because it is simply the best looking, but before I add the PE I assemble plastic parts and paint them Tamiya German Grey. Then a wash of Lamp Black thinned with turpenoid is added to the recesses to a depth. Then a light dry brush of light grey and Model Master Metallizer magnesium added wear and tear. Masking tape straps were added to the rudder pedals. One that was done the pre-painted PE was added, including the seatbelts. Once happy with the parts, the entire interior was sprayed with Alclad Flat. This blends it all together.

Adding the exhausts and the engine parts meant that the fuselage halves were ready to assemble. Fit of the fuselage was perfect.

Following that it was time for the wings. They build up perfectly. Ensure that you use the correct wing for the variant you are using. I did not. I built up the four gun heavy fighter wings and after studying the painting guide for Leisendahl’s aircraft it had the two gun light fighter wing. So I had to break out another kit that I had to get the correct wing. Either way they both built up perfectly. When installing the main spar it is essential to make sure it is centered and that it is square to the wing. Don’t forget to add the ejection chutes, part A22, as it is easy to overlook.

Since this was a Bunny Fighter Club variant and built to be a fighter bomber, I had to open up the appropriate holes on the belly for the bomb rack. Eduard doesn’t show you which one to use, there are two in the kit, and even the online painting instructions don’t mention the proper rack. I think I got the right one and built up the bomb as well.

Offering up the wings to the fuselage proved that the fit was exceptional. The rear portion did need a small bit of filling but its easy to get to and was quickly taken car of. The fit of the rest was phenomenal. The horizontal tails were perfect as well. I left the rudder off because it was painted yellow later.

I added the landing gear. The fit of the Eduard Focke Wulf kit landing gear is exceptional. They mount firmly in forward rake and set. Once the gear was added, this allowed me to add the resin gear doors. Eduard said that they added the resin gear doors because the A-2 was a ‘boring’ offering. The fit was very good. Of course, you have to use superglue to attach them. With the bomb rack in place the doors are very close tolerance. I was glad that I added it now and not after the belly was painted.

Adding the canopy masks, which fit perfectly, and then adding the front canopy was the next step. This allowed me to tape up the cockpit area and just like that the model was ready for some primer and paint.

I sprayed the canopy parts with Tamiya Dark Grey. The whole model is then painted with Alclad Grey Primer and Microfiller. Surprisingly, there was only one area that needed to be fixed up. Once that was taken care of, it was time to pre-shade with the Tamiya Dark Grey and the flight controls were painted Alclad White Primer and Microfiller. This was then marbled on the model.

The decals are very thin and worked flawlessly. The Eduard stencils were added first and then the Bunny Fighter Club decals were added. The big blue numbers really added a splash of color to the model. The decals were so thin I didn’t think there was a need for another coat of Tamiya Clear. The model was given a coat of Alclad Flat Coat.

Weathering starts with a panel line wash of burnt umber artist oils thinned with turpenoid. I also add this wash around panels that would be normally be used by maintenance personnel. Also, a slightly thicker wash was added to the exhaust areas. Since this aircraft was an early war variant, I kept the fading of the wing to a minimum. I added dots of Titanium Buff and Titanium White and then spread them out with a brush damp with turpenoid. It was then brushed fore and aft on the wings and top to bottom on the fuselage.

Chips were added with a silver and #2 pencil. Then it was time to add some dust to the upper surfaces. I use a heavily thinned Tamiya Buff and streak it like I did the fading. Unfortunately for me I don’t have a cap for my airbrush and while not paying attention I spilled a little bit of the paint on the upper wings which I didn’t notice until it had eaten through the paint to the primer coat. After much swearing and letting it dry, I sanded it out and blended it in. Then I had to repaint the RLM 75 and re-weather it to match the rest of the wing. I couldn’t even tell where it happened.

After that near fiasco I was done. I added some Barracuda Cast wheels. They are nicer than the kit ones, which are still nice. The details on the Barracuda Cast wheels were crisper and the treads deeper along with a flat spot to represent weight. They were added after drilling a hole and mounting them with superglue.

Removing the masks from the canopy proved their worth. I polished the canopy inside and out with Tamiya canopy polish. The sliding portion of the canopy was added with white glue after adding the head armor. An EZ Line antenna attached to the tail and canopy along with adding the prop assembly brought the model to a finish.

These new Focke Wulfs from Eduard are as near perfect as you are going to find. They are simple to build, fit is impeccable, and they look great when finished. I never thought that we’d see a FW-190A-2 in 1/48thscale, let alone one that is as superlative as this. As far as the Bunny Fighter Club goes, the cost of the plane is easily recoupable when buying from Eduard. The additional 15% discount is nice. The unique marking options that are ONLY available through the BFC, such as Liesendahl’s aircraft, makes getting the club a nice benefit. Additional benefits include extra discounts at events such as the IPMS Nationals. If you build these Eduard kits it is worth the price of admission.

Another winner of a kit from Eduard. This is the fifth new generation FW-190A that I’ve built and I’ve enjoyed every one of them. Buy this kit and its sister kits and you won’t be sorry. They are a joy to build and fit perfectly. The markings and decals are really great.

Thanks to Eduard and IPMS/USA for the review copy. You can obtain your copy of the Bunny Fighter Club ONLY at www.eduard.comor a show where Eduard has them.