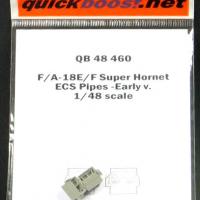 For those who stay up on the latest US Navy aircraft, we have all heard of the evolution of the classic Hornet into the all new F/A-18 E/F Super Hornet. As with any aircraft, it’s undergone several updates even within its short service thus far. One of the areas that has been updated is the infamous Environmental Control System (ECS) exhaust. Several iterations of design have been tried before the exhaust ports settled on the BARD stacks. With the early vents came insulation blankets installed behind the vents as a stopgap solution to the skin damage that was happening aft of the vents. Now, all Super Hornets from Lot 28 and up have the newer stacks built in during assembly, with modifications starting to be retrofitted on earlier jets. Several kits have hit the market within the last several years, some better than others. At first, they all had the early vents, with the Italeri kit having the original design with the saw-tooth edge, and Revel and Hasegawa producing the interim version. Now, all the latest-tool Hasegawa kits have the stacks.

Quickboost has provided some small resin parts to replicate either the early (second iteration) or late stack configuration. QB 48 460 gives you the early vents in two clean resin inserts to replace the corresponding vents on the kit.

The hanging bag with enclosed card backing comes with two resin parts. The pour stubs are conveniently located on the bottom of the vent, so no additional cleanup is needed to the part itself. Casting is perfect, with crisp detail as we would expect from anything done by Aires. The parts are very nicely detailed and have all the appropriate shapes, ports, vanes, and even the perforated screen just forward of the larger open vent is present. The small side vanes are also reproduced and these are presented much thinner than what the Hasegawa kit provides. My one concern is that the resin part is molded completely flat, where the innermost vane appears to be on a slight slope caused by the dorsal spine.

I placed the parts next to the kit fuselage for a quick comparison photo. The difference is obvious, with the molded vents being shallow, not quite the right shape, and lacking any of the inner partitions. Also note that the resin part replicates the perforated screen that covers the smaller two vents forward of other main vent, while the Hasegawa fuselage does not have the screen present.

This may be a little tricky, as you have to measure and cut out the kit’s molded vent, making a hole exactly the size of the new resin parts, and then insert the resin vents. I’m going to suggest positioning the resin part and tracing its location onto the plastic. Then start by removing the plastic from the center, and when nearing the edge do a lot of dry fitting and careful slow removal of additional material until the parts fit snugly in the hole. Do this before securing the top and bottom fuselage halves so that you can reinforce the bottom of the new resin part with some strip plastic to insure that it doesn’t pop through at a later time!

I haven’t installed these yet, as I only have one F/A-18F in the stash and haven’t decided on the final scheme yet. Depending on the aircraft, it may take these earlier vents or the later stacks.

Also, if using these early vents, you may also need to replicate the heat shield blankets that were added directly aft of the vents as part of the interim solution. Consult your references for the specific aircraft you are modeling and whether or not you should use the blankets.

This is a very nice detail and will help the Hasegawa or other F/A-18 E/F Super Hornet kit a great deal. Installation should not be too difficult, but will require some patience to insure a good fit. With the rising cost of larger aftermarket sets, a small set like this works well to improve key features while not breaking the budget. Highly recommended for all those early Super Hornet kits in the stash! Thanks to Quickboost for the sample and IPMS for my chance to review this item.

Comparison with kit vents
Previous Next